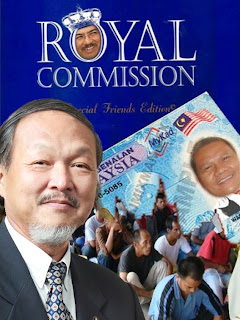 THE illegal immigrant problems in Sabah had been a ‘pain in the ash’ for many decades, the Federal and State government are seen to be less than whelming in tackling the problems which is affecting the Sabahan deeply.

Now the talk on allowing these illegal immigrants who had entered the front door of Sabah ‘illegally’ and ‘openly’ to be ‘legalized’ and become legalized foreign workers in Sabah. Is the state government doing the right thing?

There were many illegal immigrants had become ‘Sabahan’ through dubious ways or other legal ways, and their numbers are in the hundreds of thousands. Many books and figures were published to the effect, but why nothing and no action had been taken.

Recently, the government announced that they are issuing IMM13 to children of the refugees holding IMM13 certificates. There are some 85,000 or more such holders who seek refuge in Sabah some 3 decades ago from the Southern Philippine away from war or disturbances or worried to be caught.

Many of them had settled down here under the protection of the United Nation. The question is why we still allowed them to stay on while there is already peace in the Southern Philippine.

Many of these people already settled down and obtained our Sabahan status together with their families. Some had obtained Permanent Resident status to stay here for ever. Some had been used as ‘Phantom Voters’ too with ‘MyKad Palsu’!

These illegal immigrants had been the constant headache for the police, Rela, Immigration Dept, and other enforcement units. Why should we have to pick up the shit left behind and created by them?

The most recent case in Tawau where a 54 years old lady was tied up and killed by two illegal immigrants was a true sad hard fact of the cruelty of these people. The duo was caught while trying to board a boat heading home to their country at the jetty.

Now, we can see how serious the problem is and how easy to come in and get out of Sabah, it is just like no man’s land, come and go as you like.

What is the use of catching them, putting them to ‘Rumah Merah’, give them free food, doctors, transport them home in air conditioned coaches with escorts and free trip back to their home country?

They may be back in two days time. The country is spending millions of our money doing something hopeless and for nothing, and these people keep on coming everyday. Sabah is a paradise for illegal immigrants.

If the illegal immigrants are caught, why are we not punishing them by imposing a fine or imprisonment? In return, the government are so kind to them even though they had committed a crime of illegal entering to our State.

The question is, why can’t we stop them from coming in and why we failed the deportation exercise, and why we have to resource to legalize these illegal? Are we inviting more to come into Sabah?

The ten times jump in population in the past years is not enough, is the government wanting to create another triple jump in our population? If Sarawak can effectively control and stop illegal immigrants entering into their state, and maintain a steady growth in their population, why can’t Sabah do the same?

The government should immediately impose a border security tighten up permanently and close our border for easy gain entry by these illegal immigrants. No more ‘free in and free out’ concept allowed. The Chief Minister Datuk Musa Aman being the chief of the Sabah Security Council must personally held responsible if this ruling is not strictly imposed.