BE WARY OF THE B AND C KILLERS 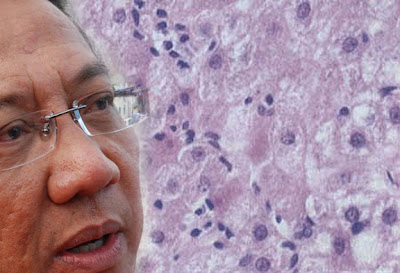 THE QUESTION is not whether it is hepatitis B or C. Both are liver diseases that can kill. But few people are aware of hepatitis C which has no vaccine against it and is far more costlier to treat, according to doctors.

They say this is because of apathy towards hepatitis C since, until recently, there had been no preventive screening of it. In Sabah, hepatitis C infects 96,000 of the 3.2m people, according to Dr Nerenthran Loganathan of the Queen Elizabeth Hospital in Kota Kinabalu.

There are 256,000 people with hepatitis B. Untreated, they lead to deadly scarring of the liver (cirrhosis), liver cancer and gastrointestinal bleeding. The diseases infect 500m people all over the world and kill one million of them every year. And the World Health Organization says they infect more people and kill them quicker than AIDS.

Dr Nerenthran, a consultant physician, tells Insight Sabah that the local figures “do not reflect the real numbers”. He says there are “healthy carriers” of the viruses who are unaware that they have the diseases.

WHO is leading a campaign against hepatitis C as it marked World Hepatitis Day on July 28. It has become one of its four health awareness days since 2010. The others are AIDS, malaria and tuberculosis. About 170m people worldwide have hepatitis C, 30m of them are in South-East Asia.

Most of the infections are caused by drug abuse through sharing of intravenous needles, tattooing and body-piercing, acupuncture, sexual promiscuity and blood transfusion. Dr Nerenthran says that people who had blood transfused to them before 1994 have a high risk of contracting hepatitis C. Babies are infected by their mothers who have the virus.

Dr Yusof says that those with hepatitis B or C have a high risk of dying from cirrhosis or liver cancer. But hepatitis B can be prevented by vaccination.

Dr Nerenthran says both hepatitis B and C can be treated if they are diagnosed early and when there is little damage to the liver. “The challenge is catching patients early and giving them the right treatment.”

But treatment is costly. Anti-viral drugs against hepatitis B may cost a patient about 400 ringgit ($127) a month, according to Dr Nerenthran. “And a patient may have to take the drugs for the rest of his life,” he says. “Treatment for hepatitis C, depending on the type of the virus, costs between 15,000 and 80,000 ringgit.” (Insight Sabah)