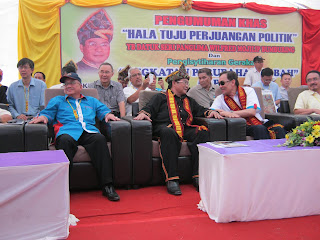 THE EXCITEMENT of being on the receiving end of two defections from Umno to Pakatan Rakyat has proven too much for Opposition Leader Datuk Seri Anwar Ibrahim, who has clearly become overwhelmed by the occasion.

During a victory celebration at a restaurant owned by defecting MP Wilfred Mojilip Bumburing (where else?) Anwar set out to seize the moment. After all, this was the best day his coalition has had in months. But he got carried away like a man not expecting too many more good days in the near future.

Anwar was welcoming to the fold Bumburing and Sabah Umno politician Datuk Lajim Ukin but as his excitement levels grew he set about attacking the government on issues he normally avoids for fear of being proven wrong.

He spoke of Pakatan plans to scrap PTPTN, forgetting that this plan has already been exposed by Umno Youth Chief Khairy Jamaluddin for having a RM23 billion price tag that Pakatan cannot refute – or afford. He claimed the cost was RM 5 billion and would come from Petronas.

He attacked the Government's debt levels despite the fact it is well within IMF guidelines at just over fifty percent and Malaysia has been praised for its prudent position just this year.

And he spoke again of the RM80 billion oil revenues he will use to fund his dreams whilst tap-dancing around the fact that this money has already been allocated to projects that help the rakyat. If you have new spending plans Anwar, let us know what existing programmes you'll be axing to pay for them.

The only thing missing from Anwar's performance was a sense of perspective.

He got carried away.

His exuberance was over the fact Pakatan has managed to win the support of two politicians. One of them, Datuk Lajim Ukin is Deputy Housing and Local Government Minister, who has been promising to resign for months now. The other is UPKO Deputy President and not a federal minister.

They are the kind of individuals who will remake the Sabah political landscape, or significantly challenge BN's position there, and given the lack of secrecy and public posturing the preceded the announcement, this was no surprise to anyone.

The Prime Minister gave the events the attention they deserved when he calmly observed that the defections "had been expected because his (Lajim's) actions and statements he had been making lately were contrary to the party's policies."

"In any case, no one is bigger than the party and it is loyalty that counts," Najib said.

Najib now has the job of sacking Lajim from his ministerial post - a task that should take him just a few minutes.

From that moment on Lajim will become a footnote in Malaysian Governmental history.

But the question remains, why have Pakatan Rakyat and Anwar in particular become so excited about this one-off event in Sabah?

It is hardly going to be a game changer in Sabah and it will be not cause an avalanche of support for Anwar.

It fell to Khairy Jamaluddin on Sunday to remind us that Umno remains strong in the state at both an Umno and Umno Youth level.

It then reminded us that both men have decided to set up their own movements to support Pakatan Rakyat rather than join any of the existing parties which means exactly how fulsomely they will back Anwar remains to be seen.

The reason for Anwar's over the top performance in the restaurant and the fact that Pakatan Rakyat is trying to make so much of this occasion implies that Anwar sees defection as his preferred political weapon of choice.

Forget about the populist policies he reeled off to his audience in Sabah. In the absence of a manifesto they are just window dressing. (The Choice)
Posted by sabahkini.net at 22:56