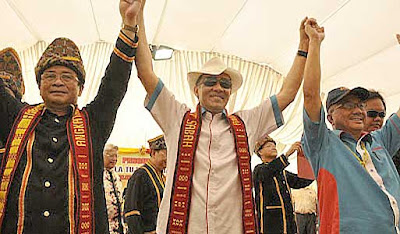 ANWAR Ibrahim's wild and disproportionate celebrations over the defection of two Umno MPs were always going to be short-lived and bang on cue, the cheering from Pakatan Rakyat has stopped.

The problem is that the decision by Wilfred Mojilip Bumburing and Datuk Lajim Ukin to give their allegiance to Pakatan Rakyat is far from unconditional.

If they were totally committed to Pakatan Rakyat they could have simply joined one of the existing parties and that would have been the end of it but both men ruled this out from the outset.

That's right, two new parties in a state where voters already have 14 to choose from but these two new parties are significant because they have no terms agreed with Pakatan.

Any negotiations about what jobs the two men would get in a Pakatan Government or about seat allocations must start with a blank sheet of paper – and no doubt with unreasonable expectations.

And already Lajim has fired his opening salvo demanding that his PPS be allowed to contest 17 of Sabah's 25 parliamentary seats. Given that Pakatan doesn't split the vote by fielding multiple candidates this means he wants most of the state. Nice try Lajim. Your loyalty to your new coalition will be noted.

Remember, Pakatan Rakyat already has a seat deal in Sabah with the local Sabah Progressive Party (SAPP). Will the defection of just two MPs force Pakatan to tear up that deal and start again? Let's see.

But without overstating it, this episode has a real chance of following Pakatan across the water to its Peninsula states.

Already seat allocation talks between PKR, DAP and PAS over the 222 seats on offer at GE13 have stalled with all parties wanting a larger piece of the pie.

DAP, which contested more than 60 seats at GE12, recently stated that it wants to field candidates in 90 seats at GE13.

And even PAS has an inflated sense of entitlement on the grounds that it made such inroads in 2008. The fact that its fortunes have plummeted since then apparently count for nothing. It wants more seats.

Remember also, this is a party that has speculated about talks with Umno ahead of its seat allocation discussions with PKR. As a tactical move it wasn't very subtle but it could prove effective.

Both DAP and PAS will be watching with interest to see if Lajim and Bumburing manage to extract a good deal from the Pakatan Rakyat numbers men. That's why this issue is so much bigger and more important than Sabah.

Pakatan Rakyat would be well-advised to keep Anwar Ibrahim away from any negotiations with this duo.

Aside from the fact that Anwa

Anwar sees defection as a campaign tool which is as clean and legitimate as the other vote winning strategies of publishing a manifesto and explaining policies. You know, the things that normal political parties campaign on.

How odd that the two men Anwar celebrated as prize catches on Sunday are now set to hold him over a barrel.

If only he respected loyalty as a quality in those around him. Then he would be more likely to get some back. (The Choice)