NOTHING WRONG WITH N-DAY THEME 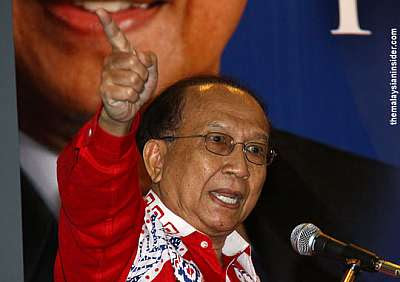 DEFENDED ....Rais has defended the National Day theme via Twitter.

KUALA LUMPUR : Information Minister Datuk Seri Dr Rais Yatim defended on Twitter today the National Day celebrations theme of “Janji Ditepati” (Promises Fulfilled), pointing out in a message on his Twitter account that “everything can look bad if the mind is closed”.

“Malaysia has truly arrived as an achieving nation after 55 years of independence. Why can’t we say janji ditepati?” he said in response to growing criticisms against the theme for mirroring the Barisan Nasional’s (BN) political campaign theme ahead of the next general election expected soon.

Past themes have been variations of Prime Minister Datuk Seri Najib Razak’s 1 Malaysia agenda, including “Rakyat Didahulukan, Pencapaian Diutamakan” (People First, Performance Now) and “1 Malaysia Menjana Transformasi” (1 Malaysia Driving Transformation).
National Day celebrations before Najib took over in 2009 appeared more focused on the message of unity, with the 2008 theme being “Perpaduan Teras Kejayaan” (Unity is the Core of Success).

The country’s sixth prime minister has also been touring the country under the Jelajah Janji Ditepati (Promises Fulfilled Tour) organised by TV3, the main station of private broadcaster Sistem Televisyen Malaysia Bhd (STMB) that is linked to his Umno party.

The tour is part of a campaign to remind voters that his administration has carried out its pledges since he took office in April 2009. Najib is bidding for his own mandate at the polls as he succeeded Tun Abdullah Ahmad Badawi a year after Election 2008. Pakatan Rakyat (PR) politicians have accused the BN government of hijacking National Day celebrations for its own political campaign.

They have also accused BN of using the theme to abuse government machinery for political campaigning purposes.

Rais, who is in charge of the ministry responsible for the theme, has been forced to defend the selection of the theme ahead of what is going to be the most keenly contested elections in recent history.

“A theme, a slogan is open to perception. If the mind is closed n heart hardened (sic) everything can look bad,” he said in his message on Twitter today.

The 2012 National Day logo has also received wide criticism since it was released this week, with cyber citizens and graphic designers saying it is the worst they have seen and not suitable for the celebration that stretches from August 31 to September 16, which is Malaysia Day.

The government eschewed the traditional logo designing competition this year, leaving the Information Department to come out with the logo which comprises words in different fonts, the Jalur Gemilang, the 1 Malaysia logo and the theme “Janji Ditepati”, all using the four colours of the national flag.

To add to the diatribe against the logo, many also made fun of the explanation for the logo.

In social networking websites such as Twitter and Facebook, many queried Putrajaya for not having a competition as done previously.

There is even a Facebook group named “Kami Bantah Logo Kemerdekaan Malaysia Ke 55” that questions the tagline “Janji Ditepati”, saying it does not make sense and appears political.
Posted by sabahkini.net at 13:59