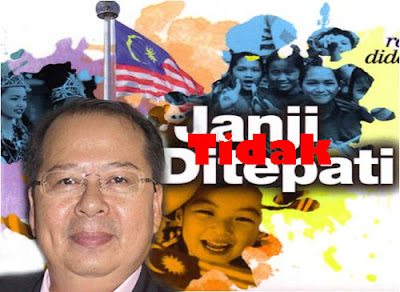 According to the former United Pasokmomogun KadazanDusun Murut Organization Vice President, he thought long and hard about the matter but Sabah’s outstanding problems was what made up his mind for him.

Maijol was among the UPKO leaders, including the party’s deputy president and Tuaran member of parliament Datuk Seri Panglima Wilfred Bumburing, who announced their resignation from the party and BN on Sunday.

In a statement yesterday, Maijol said he had been in BN for 14 years.

“I can say for myself that UPKO which I belonged to is a beautiful party with correct culture. Its president, Tan Sri Bernard Dompok is a nice and good leader. UPKO is lucky to have a leader like him.

“However after taking into consideration the long outstanding problems that we have in Sabah and with no solution in sight, with heavy heart I had to leave.

“I no longer believe that the BN government can or will solve our critical issues in Sabah, such as the long outstanding PTI problem, the high poverty level in Sabah, sidelining of the KDM in the civil service and award of scholarship, the land problems, the five per cent oil royalty, Borneonisation and cabotage policy,” Maijol lamented.

The BN government, he pointed out, has promised the RCI on the illegal immigrant problem in Sabah but everybody knows that it is mere a lip service.

“There are about 900,000 foreigners in Sabah and I suspect there are hundreds of thousands more are hiding under the race category of Malay or Bajau or other Bumiputra. These people suddenly become the new bumiputra who are more bumiputra than the KDM people. How do we feel?” he lamented.

According to Maijol, the KDM people remain the poorest people in Malaysia, like the Orang Asli in Semenanjung.

According to the EPU statistics, he said, the poverty level in almost all districts in Sabah is very high.

“For example in 2004, the poverty level in Nabawan was 70 per cent, Kota Marudu 42 per cent and Tambunan 44 per cent. The other districts are more or less the same.

“I have read the statistics for all districts in Dewan Negara recently. I got answer from the Prime Minister’s Department that the level has now gone down, but when I look at the figure, the decrease was only in the region of 5 per cent.

“In other words the level of poverty is still almost 40 per cent. The policy and implementation of poverty eradication programmes must have gone wrong,” he asserted.

Maijol also lamented that the land problems are still haunting the rural people, as their only basic belonging which is their NCR lands are taken away by big companies and government agencies making them illegal occupants on their own land.

“I can no longer tolerate this. This is a discrimination against the people’s livelihood,” he said, adding that another issue was the appointment of KDMs in the civil service.

It’s not a secret that the KDM community is very unhappy about the unfairness in the civil service, both state and federal. The number of KDM in the service is very minimal in proportion to their population in the state, Maijol said.

Moreover, they are only good for the number three or four positions in their departments or ministries, he opined, adding, “They have been sidelined for a long time. Their frustration has accumulated which will explode once the election comes. (WIKI)
Posted by sabahkini.net at 16:12