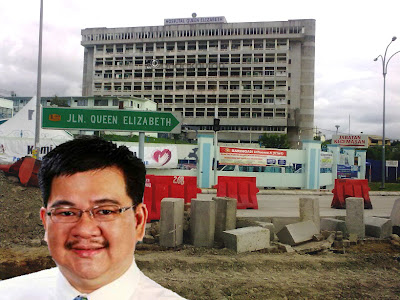 KOTA KINABALU: If there is one building that almost every Sabahan can easily identify with, it is the Queen Elizabeth Hospital (QEH) in Kota Kinabalu.

The iconic QEH was originally built at the 1.5th mile Penampang Road in 1957 by the British. This was the time when Sabah was still known as British North Borneo. It was then just a cluster of single and double storey blocks.

In 1981, an important addition to QEH, a RM20 million eight-storey block was completed.

But 28 years later, in 2009, the tower was declared unsafe and it has since been demolished.

But the old British-built blocks are however still in use today. It comprises the male and female wards as well as tuberculosis wards.

On the spot where the old demolished tower once stood is a new one now taking shape.

The new RM364 million 10-storey twin-tower is currently at its 10th storey. It is supposed to be completed by December this year but it doesn’t seem likely.

A former Beluran Hospital Director, Dr Felix Chong, who is now in politics, told FMT recently that the twin-tower is already delayed by over 160 days.

“There is a very likelihood it wouldn’t be completed on schedule, further denying Sabahans of a good and convenient hospital,” he said.

Chong who is now the vice chairman of State Reform Party (STAR) has called for the prime minister, federal health minister and his deputy, Rosnah Shirlin, who is a Sabahan, to explain the endless delay.

“Despite the government’s earlier and constant pledge that QEH’s new twin tower would be completed on this year, it is not to be the reality. We just do not want this kind of pledges made to Sabahans over and over again.

“All this while the people of Sabah are held for ransom with chaotic, sub-standard access to medical services which are our basic requirement and right. We don’t want our ill loved ones to be shuffled around between partly completed hospitals in Kota Kinabalu,” he said.

‘Excuses are easy to give’

He said the delays were no longer acceptable and saying that it was embarrassing.

“We can no longer tolerate being the only state in Malaysia that has been deprived of a general hospital for so many years now. It is an embarrassment and shameful.

“I also call upon the health ministry to get serious about the dilapidated parts in the old QEH blocks which are still being used till this day and where small incidences happened every now and then,” he said, adding that perhaps deputy premier Muhyiddin Yassin should explain the reason during his visit here this weekend.

Months ago, Shirlin had explained that the “slight” holdup in the construction of the twin tower was caused by a shortfall of cement supply, which occasionally does happen to Sabah which is dependent on outside supply.

However, the recent unfavourable weather is also believed to have further contributed to the delay.

Chong however opined that there would always be ready excuses if one is not committed to carrying out something.

“The authorities must get serious at once. We don’t take it easily because QEH is a referral hospital for all other districts in Sabah and as I said we do not want our sick loved ones be shuffled here and there,” he said.

The new twin tower when fully operational, will have a total of 660 beds, making it the biggest hospital in Sabah.

Another on-going issue at the QEH, the authorities need to look into is the the lack of parking bays, forcing families and even staff to park vehicles on the road side.

It is a common sight near the QEH that people get fined by traffic enforcement authorities – both the police and the city hall.

Complaints about this matter also keeps appearing in blogs and the local newspapers.

The problem is set to magnify when the 660-bed twin tower is finally completed, observers have said.

The Consumer Affair and Protection Society of Sabah (CAPS), James Bagah, when contacted said the health ministry should create more parking bays, no matter how temporarily the provision is.

“We got to be creative, actually they could still do so at various spots and corners within the QEH and not too dependent on the already congested parking bays nearby.

“We cannot just simply “force” those families especially in their own need of emergencies, to park at the road side, because it is the only quick available space for them at their time of need, and open this for another authorities to rake in fines from these already troubled families,” Bagah said. (FMT)