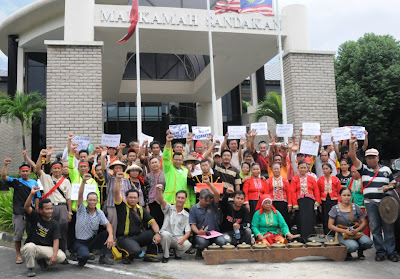 PINANGAH: State Reform Party (STAR) has warned that the increasing number of land disputes in Sabah is showing signs of turning ugly and may eventually lead to violence if the government continues to turn a blind eye on them.

In his speech at a land rights demonstration here recently, Sabah STAR chairman Jeffrey Kitingan expressed his disappointment that the state government has been neglecting the people despite the fact that the problem has been happening for many years.

“I can’t understand why the government is not doing much to help our native people who are being chased out of their lands knowing that land matters are within the power and responsibility of the state government.

“Then BN government has been promising to help our people and to protect their rights but it seems to be favouring the big companies instead of the poor people,” he said citing the case of an ongoing land problem in Pinangah in which the people’s NCR land has been awarded to a company.

Kitingan lamented that the government was yet to fully respond to the people’s grievances and that there was still a huge swath of land in Pinangah yet to be reinstated to the native owners.

He said there was still the outstanding 9,000 acres within the Maxland area and this did not include those under the ownership of two companies.

Kitingan said in many areas where such problems are happening, the companies were using foreigners to chase the locals away from their lands.

“In Sukau earlier this year, we had a case where the company bulldozers came to bulldoze the people’s houses, and foreigners came to threaten the locals to abandon their village.

“Bloodshed was avoided only because the Tombonuo villages were patient and didn’t retaliate,” he said.

Too poor for lawyers

He said the poor people now have to resort to going to court to claim their rights, but being poor they were hampered by financial constraint to hire lawyers, and limited by lack of documentation, hence they were at the mercy of the legal system, of the apathetic government inaction, and of the companies who are using foreigners.

He added that the method of giving communal titles to the villagers was now seen as an unacceptable and temporary solution by the villagers because in the end they become mere participants in the development of the land by companies, and not as owners.

“In this way the whole approach is a clever way of taking away their land, a form of hidden land robbery.

“The people have also got fed up with hamper handouts. They want permanent solutions to their problems, not keep getting cooking oil, packets of rice, salted fish and so once in a while.

“To them this has become an insult because they feel they are being treated like idiots and beggars,” he said.
Posted by sabahkini.net at 22:37