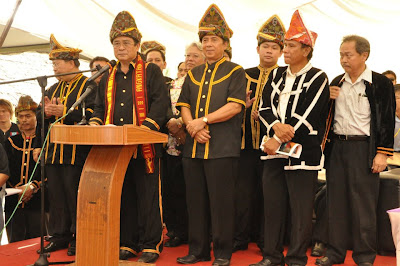 KIULU : PBS Kiulu Division Vice-Chairman, John Hussein has submitted his letter of resignation as PBS member and relinquish all party position that he held, Vice-Chairman of Kiulu Division as well as Branch Chairman for Kg. Simpangan Lama and officially declared his support for Datuk Wilfred Bumburing and joined APS.

John Hussein who is also a Pemaju Mukim has also submitted his letter of resignation as Pemaju Mukim by giving 30 days notice starting from August 1, 2012. He will be taking a one month leave from tomorrow.

"I fully agree with the statement by Datuk Seri Panglima Wilfred Bumburing on the BN inability to bring about a positive solution to the many issues affecting Sabah, especially issues such as PTI and the call to set up RCI.

"The delivery system being practised by the BN government has never been improved to meet the desired objective. Take for example the proposed SMK Nabalu which took a long time to be implemented and is now stalled with no proper and acceptable explanation from the implementing authorities," John Said.