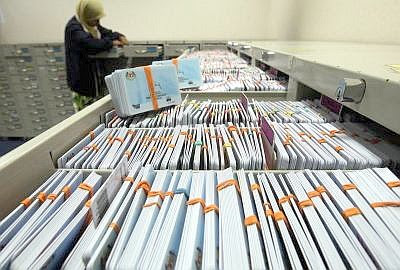 PETALING JAYA: More than 500,000 Malaysians have yet to collect their MyKad from the National Registration Department and their apathy may result in unexpected problems.

If information, including addresses, had been updated while applying but the new MyKad are not picked up on time, there could be snags when conducting businesses or applying for loans.

“The details in the old or temporary MyKad will be outdated and will not match the NRD's updated database,” NRD's public relations officer Jainisah Mohd Noor told The Star.

A total of 53,183 Malaysians, who had applied for the older version of MyKad issued before January, had also not collected their cards.

The new MyKad has been a hit among Malaysians as it is more durable compared to the older version.

The NRD received about 21,000 applications daily for the card in April alone.

Malaysia is the first country in the world to use an identification card that incorporates both photo identification and fingerprint biometric data on a computer chip.

Besides being made of polycarbonate for stronger resistance and embedded with an improved chip, the new card also incorporates a “ghost” image of the cardholder to curb forgery.

Unlike the old MyKad, the identity card (IC) number on the new one is laser-engraved in small letters below the photograph.

Among the other features are screens and patterns in microprint, including an ultraviolet (UV) guilloche pattern an ornamental band or border with a repeating pattern of two or more interwoven wavy lines.

Jainisah said indifference was the main reason the cards had not been collected.

“Other reasons include applicants who are overseas, incarcerated or in hospitals and those who live in remote areas and face difficulties coming to towns,” she said.

Those who apply to upgrade their MyKad to the new version can still use their existing cards while those whose cards are lost or damaged are issued with temporary MyKad.

Jainisah said the NRD had the power to dispose of uncollected MyKad 18 months after the date of issuance, in accordance with the National Registration Regulation 1990 (Amendment 2007), but it had not been enforcing it.

Those whose cards are disposed of would be penalised with a RM20 fine and have to pay an additional RM10 processing fee when they re-apply for a new card.

To reduce the backlog of uncollected cards, the department has taken various measures, including opening collection counters during weekends and sending applicants information on when and where to collect their MyKad.