REVEAL ALL AGREEMENTS ON TALAM 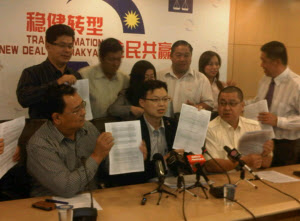 KUALA LUMPUR:  The Selangor state government has been urged to disclose all agreements made by the previous state administration pertaining to the Talam Corporation’s debt-restructuring exercise.

“The Pakatan Rakyat state government even signed a new agreement on the matter in 2010, which means they are no longer bound by the previous agreements,” he said when commenting on a statement by Selangor state executive councillor Teresa Kok.

“So the claim by Kok that the state government is bound by the agreements signed by BN is misleading and false,” Chua said.

On July 25, Kok published a statement on her blog saying that the Selangor government had no choice but to abide by the agreements made by the previous state administration on Talam’s debt- restructuring exercise as it was approved by the court.

Since early this month, Chua made various allegations, saying that the Selangor state government had used nearly RM1 billion of public funds to save developer, Talam Corporation (now Trinity Corporation).

Chua, who is also Agriculture and Agro-Based Industries Deputy Minister, said that there were three agreements made by the previous state administration, which were in July 2005, March 2006 and March 2007 in regard to the debt-restructuring exercise.

However, he pointed out that the Selangor state Hansard of 2010 and 2011 made no mention that the current state government is still being bound to any of the agreements.

“We welcome Kok to the reveal the agreements to the people to prove that they are still valid even after the Pakatan administration signed a new agreement,” said Chua. (FMT)
Posted by sabahkini.net at 16:05