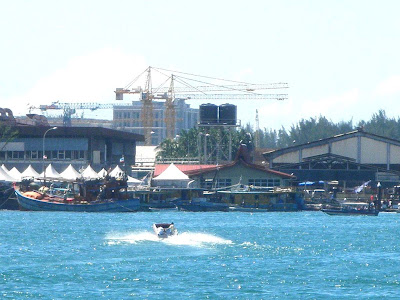 THE QUESTION on whether FT Labuan is still having a 'free port' status now, and is the government going to allowing the 'Barter Trade' to be revived on the island?

This was raised by the Kota Kinabalu Member of Parliament Hiew King Cheu recently in the June sitting in the Parliament. The Finance Minister in a written reply said that the Labuan Island is given the special right as a 'Free Port' which is provided under the Clause XVIII under Section 154 to 160 of the Custom Act 1967. Thus, FT Labuan is a 100% free port.

At the time being, the government is not considering to allow the Barter Trade in FT Labuan to be restarted again.

The people in Sabah and from FT Labuan have requested the KK MP during his visit to Labuan Island to help to put their question in Parliament. After knowing the answer, they are not happy at all. Many people asked why the island is a 100% a free port and yet the prices of many items are more expensive than Sabah and Sarawak? In the past we can buy cheap goods from Labuan which included those imported from overseas country.

The Barter Trade business is the live-line of Labuan Island and last time many people depended on this to earn a living. The traders from neighbouring countries had regularly came to do their trading on their produce and in exchange for the Labuan goods.

The barter trade was terminated by the government claiming that the trading brought along smuggling and illegal businesses. This severely cut off the live-lines of many businesses of the people in Labuan.

They had not recovered until today and their businesses gone, and in return this had affected seriously the economy of Labuan Island. The once booming island has been converted to an island without much business activity. Labuan has been suffering from very slow economic growth since.

KK MP Hiew who often visits Labuan has close connection with the people here, and he felt that Labuan needed immediate attention especially in its economic advancement. There is just not enough economic activity here to sustain its financial stability. The government is not doing much in terms of helping the island.

The various businesses here can not grow without injection of fund and other big investments and development projects. Hiew said to put Labuan back on its feet, the government must put in great efforts and encourage investments into the island. It has plenty of potential and opportunities, if it is carried out by a government who has the determination and vision to open it up.

Back in the mid 1970s, Labuan was just an island with little or no industries and business opportunities. It had became booming until the establishment of the oil rig fabrication yard (Broom and Root), the Labuan Flour and Feed Mill, the Sabah Ship Yard, the Shell oil and gas base and terminal, the Asian Supply Base etc.

The Kg Rancha Rancha and Pulau Eno were transformed from a fishing village into a heavy industry site with the setting up of the gas methanol plant and the iron smelting plant. For this, we must thank the people who had the vision, the wisdom and the will power to give these to the Labuan people. These people shall be remembered by all here in Labuan.

It is sad to see that today there is no plan to bring into Labuan any economy booster or any positive economic directives/plans whereby the Labuan people can fall on or follow. In another words, the BN government has totally failed the Labuan people. (DAP Media)