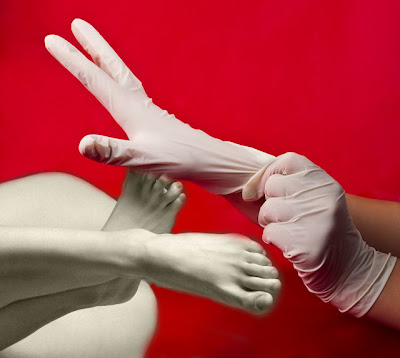 RECONSTRUCTIVE .....Girls as young as 11 are getting reconstructive surgery, causing alarm in the UK.

IN THE same way men across the world compare the size of their penises, women in the UK apparently compare the shape of their vaginas—and those who find them looking "weird and ugly" are opting to spend RM15,000 to have them surgically enhanced to become "designer vaginas".

Britain's National Health Service (NHS) recorded over 2,000 labiaplasties—plastic surgery for the vagina—carried out in 2011, although experts believe the actual count is much higher. "It's a massive boom industry in the private sector," said one medical watcher.

The operation, which reduces and reshapes the inner side of the vagina, costs around UK£3,000 and has seen a fivefold increase in the last five years.

Consultant gynaecologist Dr Sarah Creighton said her clinic sees girls as young as 11 seeking surgery. "It's shocking, particularly because we’re seeing girls who are really young. They're asking for surgery that's irreversible and we don’t know what the long-term risks of the procedure might be."

Dr Liao Lih-Mei, a consultant clinical psychologist at University College London Hospital, said women seeking labiaplasty need more chances to discuss their concerns. She said a woman's anxiety or dissatisfaction with certain areas of her life could manifest itself as body image concerns.

"Surgery may have its place, but it needs to be seen as an extreme solution. Worries about the labia are quintessentially psychological. When a woman says she's worried about her labia, surgeons may hear the words 'labia' and 'operate'. I hear the word 'worry'," she told the BBC.

One woman who did get herself a designer vagina was Jessie. She told Wellcome Trust, a London-based organisation that aims to improve human health, she spent hours flicking through magazines looking for women with a similar vagina to hers but couldn't find any.

"This was another piece of evidence that there was something wrong with me," she said, adding that it made her feel like a "complete freak".

Jessie experienced recurring nightmares where she would imagine her vagina as a scarf that would wrap itself around her neck, and there would be people standing around laughing and pointing.

"Shortly after the operation, I would dream that they would grow back and I'd wake up in a bit of a panic," she said. One year later, however, she no longer has those nightmares and said she feels "really silly talking about it", but it was significant enough to cause her daily anxiety.

Another patient, Emma, said she thought her genitals were abnormal, too. "It was very long, dark and stretchy. It looked disgusting and shrivelled up. It was the only thing in my life that made me feel depressed."

Dr Creighton said although a small percentage of women do have abnormal vaginas, she found in the majority of cases those with concerns had what she would consider normal sized vaginas. The trend for more extreme pubic grooming leaves the vagina more exposed, something that has contributed to more women seeking surgery, she added.

Dr Creighton believed the future demand for designer vaginas would be big, due to society's wider and growing desire for cosmetic surgery and changing expectations about the desirable appearance for women.

Meanwhile, Wellcome Trust has launched an animated film, hoping it will encourage debate about the surge of the trend. Called Centrefold, it features three women—including Jessie—discussing how labiaplasty has affected them.

As for the NHS, there are no guidelines on the size and shape for female genitalia—except for what's in a patient's head. (BBC)
Posted by sabahkini.net at 06:25