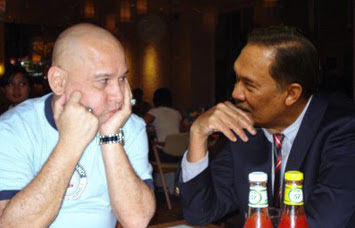 WORD has come recently that Datuk Seri Anwar Ibrahim is making a hard push to pick up support in Sabah by defections, deals or any other means necessary -- including, if Raja Petra Kamarudin is to be believed, the outright buying of MPs from the Borneo state  and his machinery in PKR is pushing this news to every Opposition web portal it can reach.

This is now becoming a matter not only of hard politics, but perhaps of political survival as well.

Yet while they are reliable when it comes to the Sabah story, over-egging it and making it look like a coup when it is actually not a game-changer, the opposition portals have been less tender with Anwar the Politician. Of late, Anwar has come under withering fire from columnists in Opposition web portals -- never from the so-called news articles themselves, however - and its has been fairly unrelenting in recent days.

The attacks have not been triggered by Pakatan Rakyat's lack of the minimum components of a competent Opposition, such as a shadow cabinet and a joint manifesto. They have not been launched because of the Opposition pact's complete inability to work together, or even resolve basic questions like the application of hudud law.

They have come because Anwar testified that he does not believe there should be gay marriage in Malaysia.

One might profess some amazement - over this they go to war with the leader of the Opposition? -but it is actually a testament to the remarkable shortsightedness of so many of Pakatan's most faithful, and to Anwar's determination to be all things to the rakyat, without regard to contradictions.

It should be noted that Anwar has been quite forward with this since the infamous BBC interview (which triggered the article by Utusan Malaysia and which in turn drove Anwar to court against Utusan Malaysia). In the interview with the BBC (which has been available online), Anwar was simply speaking realistically about Malaysia's view of homosexuality and gay marriage when he said:

BBC: How far do you want that message of freedom to go? Because your case, that you've just been acquitted of, that generated a really, uh, a really newly-invigorated gay rights movement in your country. There were a lot of people stepped up to bat over that, even though you'd been acquitted. Are you prepared to take that idea of anti-discrimination as far as gay rights?

Anwar: We will, um, have to review some of the archaic laws. We, um, Muslims and non-Muslims in Malaysia, we believe and are committed to support the sanctity of marriage with a man and a woman, but we should not be seen to be punitive...

It is the "review some of the archaic laws" and "punitive" parts that triggered the Utusan Malaysia article, but it is Anwar's sworn testimony repeating that "Muslims and non-Muslims in Malaysia, we believe and are committed to support the sanctity of marriage with a man and a woman," that set off his supporters.

We must note that this time, Anwar was right. The rakyat is not clamouring for gay marriage and shows no signs of doing so; to the contrary, one must search for a very long time to find a political expert who believes such a measure would have more than negligible support in any state or in Parliament.

But the uproar is predicated on the idea that Anwar has championed positive equality for all, and his now saying that Malaysia would "discriminate" against homosexuals in this regard is a violation of that pledge. For this, Anwar has only himself to blame. His career in Opposition has been modeled on allowing voters to see him as whatever they wish. Whatever the merits of his suit against Utusan Malaysia, this debacle is his own doing.

And so it was that Human Rights Watch, the New York left-wing group that has befriended Anwar for 20 years, condemned him for his "anti-gay discrimination." So now he had pleased PAS but not the mat salleh supporting community. What to do?

Worse for Anwar is the fact that those same writers - and now others, unconcerned with gay marriage or discrimination against homosexuals -- have begun noting that Anwar appears to be in politics primarily for Anwar's sake.

His constant trips abroad, the large slots in his calendar for favourable foreign media, the constant lawsuits against any who contradict him, his inability to get Pakatan Rakyat to agree on anything, all of the things for which he has been pilloried for years are now suddenly fair game.

Worst of all, some are asking the question that Raja Petra recently did: Suppose Pakatan's component parties win a majority of seats at GE13. Suppose the Yang di-Pertuan Agong were then to say, Very well, but Pakatan Rakyat is not a registered party. Provide me the memorandum of agreement on issues like hudud law and bumiputra subsidies that will guide you when you form my Government, or I will name the largest party -- Barisan Nasional -- to form my Government.

What will happen then?

Anwar will need to be able to answer this question, and very soon, or angry editorials in Malaysiakini will be the least of his concerns. (The Choice)