SOAP OPERA WILL NOT BE A GAME CHANGER 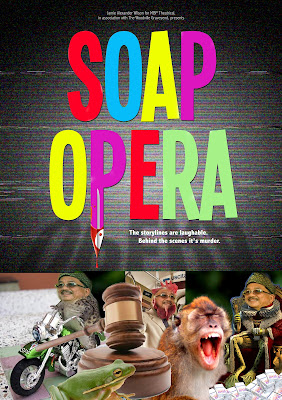 SABAH Umno politician, Datuk Lajim Ukin has done the near impossible and managed to turn his resignation from Umno and defection to Pakatan Rakyat into a non-event.

For so long had he dropped hints that he was going to leave Umno that by the time he announced his decision to resign as Umno branch chairman of Karambai Kebatu at his 57th birthday party last month, it was reported that of the 500 guests present "no one was surprised".

The Sabah old-timer has been playing the "going to resign soon" game for months.

This is the worst outcome for Pakatan Rakyat leader Datuk Seri Anwar Ibrahim who is trying to portray Lajim's pledge to support Pakatan as a big and new event that could define GE13 (it won't).

Instead, witnessing the "so what" response of the political analysts in Sabah and the rest of the nation deprives Anwar of the drama he thrives on in the absence of substance.

Meanwhile, fellow MP Wilfred Mojilip Bumburing is also making his move to work with Anwar, but not truly throwing his weight behind Pakatan Rakyat by joining one of the three established parties.

Pakatan Rakyat, and indeed the people of Sabah, need these two new political parties like a hole in the head.

Exactly what is it about the existing party structure of Pakatan Rakyat is it that the two men don't like? Did Anwar try to get them to join PKR? If so, what did they say? What were they promised by Anwar, who is trying to make orchestrated defections his campaign startegy instead of honestly going out and offering alternative social and economic policies to the rakyat?

These are all serious questions that require an answer.

One question that Anwar can't escape is what will these new political movements want from Pakatan in exchange for supporting the Opposition Coalition? After all, as new entities they have agreed no terms with Pakatan so everything from here on, everything is subject to negotiation.

Let the horse trading begin but don't expect any easy conversations. We got a glimpse of just how difficult these two men could be for Anwar just two weeks ago when he was due to fly to Sabah to welcome Lajim and Bumburing into the fold but suddenly the event was cancelled leaving Anwar to hastily change his travel plans.

What is it about Anwar and defections as an instrument of seizing power? He seems to prefer it to nurturing loyal talent within his own ranks and in the absence of a proper manifesto by which voters can judge Pakatan Rakyat, this could end up being his key election strategy.

Inside his own PKR he has his wife, his daughter, and two of his top lieutenants fighting a factional war that is dividing and weakening Pakatan, while PAS and DAP are at war withe ach other over hudud.

Yet Sunday's events and Anwar's failed pledge to seize power on September 16, 2008 via mass defections shows just how much is makes faith he places in this kind of under-the-table strategy.

By way of contrast the Prime Minister (and head of BN) Datuk Seri Najib Razak is taking these latest events in his stride.

He said the defections "had been expected because his (Lajim's) actions and statements he had been making lately were contrary to the party's policies."

"In any case" Najib added "no one is bigger than the party and it is loyalty that counts".

Najib is currently spelling out how much he thinks no one is bigger than the party by rejecting as candidates for GE3 some established BN personalities. He prefers to nurture young and loyal talent and his "war room" has so far thrown out 50 nominations, mostly of aging non-progressive candidates.

Meantime Lajim's position as deputy housing and local government minister will be decided tomorrow. Expect him to be sacked if he does not resign.

Umno Youth leader Khairy Jamaluddin asked that Lajim be a gentleman and resign his positions as an Umno member and as deputy housing and local government minister.

Khairy dismissed the idea that the departure of Lajim would make a difference in the way people vote in Sabah. He said Umno would remain strong in Sabah anyway.
Posted by sabahkini.net at 22:25