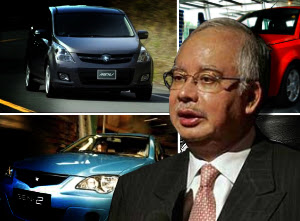 PETALING JAYA : PKR claimed today that its proposal to provide cheaper cars by cutting duties and tax can easily be financed by slashing the hefty sum allocated annually for the Prime Minister.

The projects include the RM500 aide for the poor under the BR1M project which cost RM2.6 billion and other welfare handouts under Prime Minister Najib Tun Razak’s 1Malaysia concept worth RM3.57 billion.

“If this amount is added to the announcement of half-month bonus to civil servants worth RM2.2 billion, the amount of candies spent by the prime minister to buy votes is RM5.77 billion,” Rafizi told reporters here.

The PKR leader added that since Najib took office in 2009, the management and development expenses for the PMD had steadily increased to an average of RM1.4 billion and RM4.6 billion respectively.

This meant that Putrajaya’s existing coffers already had the amount needed to revamp the present tax scheme under the current National Automotive Policy.

“The RM8 billion (collected) should not be in government’s hands. It should be in the pocket of the rakyat and they should decide on how it should be spent,” said Rafizi.

Leaders from the ruling coalition in an immediate reaction to PKR’s proposal announced last Tuesday had said that cutting duties and tax would severe the government’s revenue stream considerably.

They also claimed the revamp would hurt national car makers Proton and Perodua as consumers were likely to opt for imported cars with the popular belief that they would be cheaper once import duties and sales tax were reduced.

Rafizi dismissed the idea, saying his detractors “are clueless as to how excise duties work”.

Excise duties were imposed on a specific group of goods at a fixed amount regardless of the varying brands or qualities. For cars, the percentage only varied according to the engines’ capacities.

Rafizi said PKR had already detailed the mechanism to substitute the “loss” of revenue including moderating the PMD’s bills and “changing the ways” Approved Permits were distributed.

He said that his party had already drafted a plan to better utilise the AP system which would be announced by PKR de facto and Opposition Leader Anwar Ibrahim next week.

Malaysians were currently paying duties of between 65% and 105% on cars they buy on top of 10% in sales tax which was among the highest in the world.

This would lead to more real cash for consumers to spend and help stimulate the economy.

Just last year about 20% of the RM581 billion total household debts in the country were being held in cars, an asset that depreciated over time. (FMT)