PANTIES OFF FOR NAKED BOOK FAN 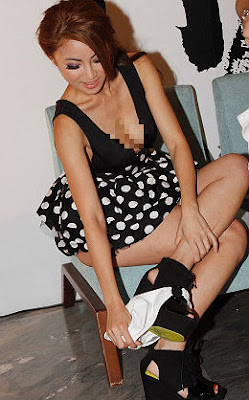 EASY......Gloria showing how easy it is to get into her pants.

JUST how hard is it to get into Gloria Wong's knickers? Not much apparently. At a recent appearance for a book of her naked photos, the Hong Kong pseudo-model—and former girlfriend of sex beast Edison Chen—whipped off her panties and gave it to her fan with these encouraging words: "It still has my body heat."

Her underwear was part of a two-piece white bikini that was barely covered up by her revealing polka dot dress, reported the Oriental Daily.

She also claimed that her photo album was different from other books because it showed "the real" Gloria. "All the pictures are authentic," she said. "We didn't use Photoshop to enlarge my breasts to show my true side."

But when reporters asked about the orange peel skin on her thighs, clearly visible in some of the images, she seemed markedly embarrassed. "Actually, that photo should have been touched up. I don't know why it's like that," she answered with a giggle.

Critics have remarked that at 31, Gloria's over the hill for the pseudo-modelling industry and that her book looks like a desperate scheme to extend her fame.

She's tried loads of publicity stunts before to salvage her sagging popularity, including spewing controversial statements and verbally attacking her rivals, but little has paved her way to the A-List.

One trick she tried to make headlines with was exposing her affair with Edison, by leaking intimate photos of them together and claiming they dated for two years from 2003. But celebrity watchers knew full well that he was playing the field at the time and only considered her "a friend of my sister's"—with benefits.

To her credit, Gloria was prepared for his denial of the scandal and produced even more evidence of their relationship, including a sex text chat between them. In the sext, Edison said he was staying at a hotel, was about to go to the gym, and asked her what she was doing.

He apologised twice after she ignored his message. According to their timeline, they had already split up and Gloria told reporters that she didn't meet Edison because he already had a new girlfriend when he proposed the hook-up. (Oriental Daily)
Posted by sabahkini.net at 05:29