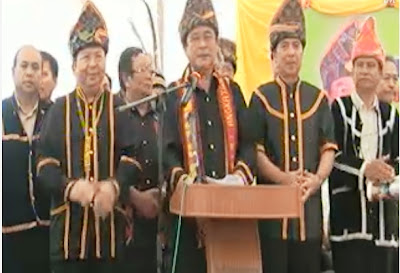 The Deputy President Of Upko made his announcement at a gathering here, thus confirming rife talk of late, that he was quitting BN and Upko, the party he co-founded with Tan Sri Bernard Giluk Dompok.

He told reporters that their resignation letters were submitted to party headquarters last week.

He divulged that Dompok had tried to persuade him not to go but eventually accepted the fact that Bumburing was steadfast in his decision.

The Tuaran Member of Parliament resigned as the chairman of Tuaran BN on July 23.

Earlier, when addressing a crowd of more than 4,000 people at a restaurant in Dalit, Bumburing also announced the setting up of Angkatan Perubahan Sabah (Sabah Reformation Movement) which he said will support the opposition coalition in Sabah.

“We, the former Upko and PBS leaders are of the opinion that we cannot support BN anymore for many reasons. It is for that reason, my comrades and I have officially left BN and we have set up a new platform called the Angkatan Perubahan Sabah.

“APS is joining PR and we fully support Datuk Seri Anwar Ibrahim’s leadership in the coalition. From today onwards, we will be going around Sabah, especially to the KDM areas to create awareness about the movement and I am confident that with the support of the Pakatan Rakyat leaders, majority of the KDM will support Pakatan Rakyat,” Bumburing said at the gathering with Datuk Seri Anwar Ibrahim also present.

He clarified that APS was not a party for any particular group but a reform movement to strengthen the opposition coalition.

According to him, APS members are not meant to displace existing leaders in Pakatan Rakyat but to support them and make the coalition stronger.

Bumburing also acknowledged that his decision to leave BN would give rise to accusations against him.

“I have read in some blogs that I am leaving BN and Upko because I lost in the party’s divisional election. Let me make it clear that I won the Upko Tuaran divisional chief’s post uncontested but I rejected the post.

“Then there are talks that my decision was spurred by the fact that I was not re-nominated as a BN candidate. I would like to stress here that in my numerous meetings with party president Tan Sri Bernard, I told him that I will have to bring up his name when I reply to this accusation, he asked me to accept the nomination as Tuaran MP.

“But I said, sorry brother, I will not stand on a BN ticket,” Bumburing said, stressing that struggling for the people’s cause and not the post of an elected representative was what drove him to make his decision.

He also reminded the people that he was not nominated in the 10th and 11th general elections but he continued to carry out his duty as Upko deputy president in accordance with the party’s struggles.
Posted by sabahkini.net at 15:52