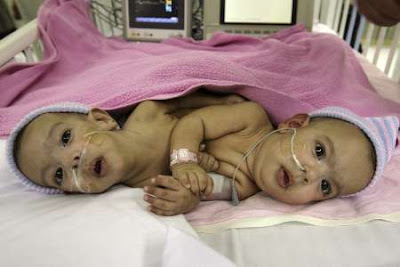 The two 15-month-old boys, Muaimin Azli and Muaiman Azli, were joined at the groin and had shared a penis, bladders and three legs, one of which is deformed.

After the July 14 operation that involved 19 specialist doctors, Muaimin only has one leg and will need a prosthetic limb. His twin, Muaiman, was able to retain both legs.

“Muaimin only has one leg. So the rehabilitation process for him will take time. Muaiman, who has both legs, will also need surgery to treat his abnormal leg,” the general hospital’s head of paediatric surgery Datuk Dr Zakaria Zakari was quoted as saying by English daily The Star.

He also reportedly said that “both twins required reconstruction for their bladders, pelvic bones and large intestines.”

Neither of the boys has an anus and may undergo further surgery.

The Star also reported that the duo are the 21st Siamese twins who were surgically separated in Malaysia, and the 14th pair in HKL.

Conjoined twins are an uncommon birth defect in which identical twins are born with parts of their body fused together.

The phenomenon gained the name “Siamese Twins” following the popularity of the most famous examples, Thai brothers Chang and Eng who were billed as such as part of the PT Barnum’s circus.

The most recent successful surgery of conjoined twins in the region was in Singapore in 2000, during which surgeons were able to separate a pair of Nepalese twins who had been joined at the head.

In 2003, also in Singapore, an attempt to operate on another pair of conjoined twins turned tragic when both patients died during surgery. (TMI)