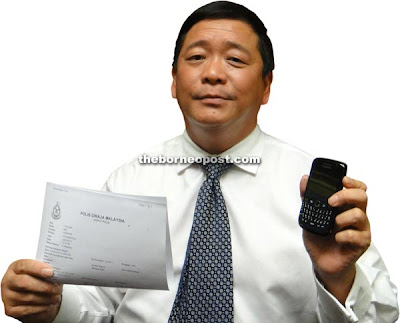 REPORT..... Lai shows the police report and the mobile phone on which he received the threat.

MIRI: “Are you afraid of guns? The next target is you. I’ll let Mirians know.” That was the death threat Miri Mayor Lawrence Lai received via an SMS in Mandarin on Tuesday evening while in Kuching for a meeting.

“I have no idea who sent the SMS to me,” said Lai yesterday.

“I have lodged a police report to assist police in conducting the investigation and also for the safety of my family members and myself.”

In a handwritten statement, Lai said the police would conduct a full investigation.

“I have spoken to the police who have agreed to conduct a full investigation into the matter, particularly the source or identity of the sender and also to take necessary action against all parties concerned,” he said.

“Everything has been submitted to the police.”

Lai added that he would not bow to the threat and would continue to serve the people.

“I shall continue to carry out and discharge my duties and responsibilities as usual as Miri Mayor without fear or favour,” he said.

What motivated the threat is unclear but Lai has been in the limelight recently for an uncompromising stand on not renewing the licences of dubious reflexology and spa centres here.

Lai took over as mayor from Datuk Wee Han Wen in 2008.

He previously served as a councillor for the Miri Municipal Council from 1993 to 1999 and was also on the Miri Port Authority board. (theborneopost)