IS A ANWAR-SHAFIE PUNCH LETHAL ENOUGH? 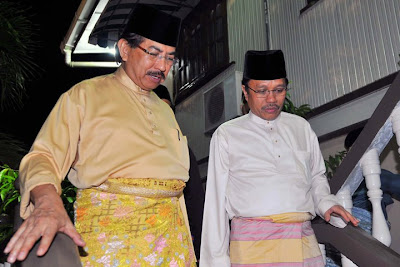 DICE.....Now that Beaufort MP Lajim Ukin has officially thrown the dice, on behalf of his 'friends', the question remains if Sabah BN Chairman Musa Aman will fall.

Strangely enough, for all his words against Musa, Prime Minister Najib Tun Razak and other “incapable” Umno leaders, there’s no talk of Lajim not having a future in Umno.

A source close to the Lajim-Shafie circle recently told FMT that Lajim “will force Najib’s hand”.

“He’s going to force Najib’s hand now. He wants Najib to keep his word and force Musa to step down… let’s see what happens,” the source had said in a text message last Friday night.

The comment was somewhat confirmed when Lajim announced his “conditional” withdrawal from Umno at a buka puasa gathering last night.

Lajim declared that he was quitting his positions in the Umno supreme council and his Beaufort division, but “will remain as Umno member and deputy minister”.

He also said: “I am disappointed with Prime Minister Najib Tun Razak who promised to make changes to the Sabah Barisan Nasional leadership but has not done anything until now.

“I can no longer be a Yes Man in BN. I am firm with my stand to pressure the state and the federal governments to develop Sabah.”

Lajim also said that he will leave it to the Umno supreme council and Najib to decide on his membership and party respectively.

But observers here think it’s unlikely that Lajim will be sacked from the party because “he has friends in very high places”.

Shafie is an influential member of the Umno supreme council and is being 'mentored' by Deputy Umno President Muhyiddin, who is strongly linked to Mahathir.

Many believe that the Umno supreme council is so deeply divided that Najib has lost control and that Mahathir was now calling the shots, but from deep behind the scenes.

Lajim’s arm-twisting of Najib to act against Musa is seen as a “final” act of sorts in view of the impending general election.

Speculations are rife that Najib will call for election in September just after Malaysia Day and before Hari Raya Haji in October. But alongside these rumours are views that his wife may just convince him to complete his term as prime minister first.

Shafie is eyeing the Sabah chief minister’s post and for now Musa is in the way.

Over the past months, there have been a steady rise in attacks against Musa. Political observers here believe that they are engineered by Shafie’s hidden hands.

In fact speculations here are that even the initial disclosures of Musa’s foreign accounts and allegations of money laundering were allegedly engineered by Shafie via his emissaries in PKR.

Interestingly enough, Lajim is also 'closely' associated with Anwar, who was with him last night.

Those in the know of Lajim’s political history have been flogging the fact that it was Anwar who, in 1994, allegedly 'bought' and brought Lajim into Umno resulting in the PBS government’s downfall.

Anwar was at the time the deputy prime minister.

This time too observers are foreseeing a downfall – Musa’s – again courtesy of Lajim,who was once a Sabah Deputy Chief Minister.

Anwar has allegedly promised Lajim a Chief Ministership if Pakatan Rakyat wins most of the seats in Sabah.

Yesterday, Anwar, who was present at Tuaran MP Wilfred Bumburing’s function to announce his withdrawal from Upko and BN, said that Sabah would spring “more surprises” and the exit of Bumburing was only the beginning.

He lauded Bumburing and Lajim’s decision to stand up against BN’s corrupt pratices and urged Sabahans to vote out the ruling coalition.

Bumburing, meanwhile, said that although he “loved Upko very, very much”, he could “no longer support BN”.

Yesterday, Bumburing launched a new entity, Sabah Reform Movement, which he announced will be aligned to Pakatan.

Incidentally, both MPs were allegedly on the list of defectors to PKR in Anwar’s now infamous Sept 16, 2008, threat to take over Putrajaya.

Whether or not they are still acceptable to Sabahans in general is debatable. But what is interesting is the political cauldron in Sabah and what’s in it.

The question now is whether Anwar and PKR are bedding Umno to secure both their futures. (FMT)