LAJIM DOES NOT WANT TO MISS THE BOAT 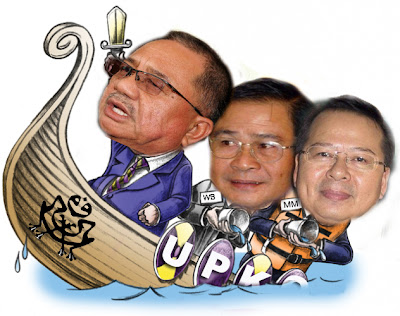 FORMER Umno Supreme Council Member, Datuk Seri Lajim Ukin's decision to quit all party posts is influenced primarily by Pakatan's psychological warfare that they will form next government after the upcoming general election" which has no basis at all".

Describing the Pakatan's confidence to achieve the desired goal as a mere political propaganda, Sabah Umno deputy liaison chief Datuk Seri Salleh Said Keruak said his resignation has nothing to do with internal Umno problems in the state.

"I believe he (Lajim) does not want to miss the boat...that's why he tried to find an excuse for his mission, but to me, what Pakatan is promising is just a hope or dream," he told Bernama, here today.

However, he has chosen to remain an Umno member and as the deputy housing and local government minister.

Yesterday, Umno secretary-general Tengku Adnan Tengku Mansor was quoted as saying that "What has happened is an internal issue of a personal nature involving Lajim and certain people in the domestic political arena. It should not be linked with a party that has rendered exceptional service to the nation and people".

Umno Information Chief Datuk Ahmad Maslan was also quoted as describing the departure of Lajim from the BN as more of a personal problem.

Salleh, who is also Sabah Legislative Assembly Speaker, said the state leadership was always open for discussion on how to strenghten the party and everyone has a role to play.

"Our YAB Sabah Umno liaison chairman (Datuk Seri Musa Aman) is very open and accomodative. However party must reject leader who put our party at ransom.

"Lajim's political calculation is wrong. All study conducted by professional indicate Prime Minister Datuk Seri Najib Tun Razak's popularity is at comfortable level," he said adding that Lajim's departure would not affect the strength of the BN in the state.

The former Chief Minister said: "Insyallah Najib's popularity will be able to lead BN to two-thirds majority in the next general election".

Salleh said Umno and BN was ready for the general election, which is due to be held soon. (Bernama)
Posted by sabahkini.net at 16:39