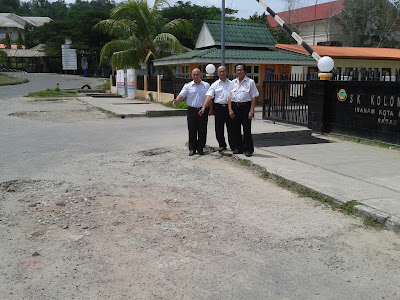 THE SABAH DAP received public complaints concerning the road pavement in front the SK Kolombong which is all cracked up and forming big pot holes. Edward said that they received complaints from the parents of the students studying at SK Kolombong and they told him that the badly damaged road is in front of the entrance to the school.

They said that whenever they sent their children to school their car will receive a bang on the underside of their cars when passing this section of the damaged road as they can’t avoid this part because of the heavy traffic at that particular moment.

They also said that they have complained to the authority concerned many times but up to now the badly damaged road has not been repaired.

Edward said he hoped that the authority concerned will immediately repair this section of the road for the convenient of the parents who send their children and pick up them everyday.

At the time of inspection, the DAP team saw the road opposite the school was under resurfacing throughout. The question is why the nice road is being resurfaced again even though it has no pot holes like the one in front of the school.

It is not logical for nice road being resurfaced yearly while many kampong roads are without bituminous road surfaces. Is this the work of the BN government, or is it nice good road are easier to work on and faster to earn money? (DAP Media)