BEST WAY FOR BN TO RESOLVE ISSUES IS FROM WITHIN 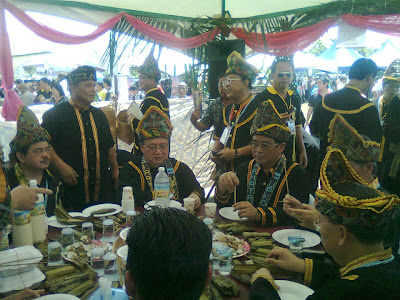 Commenting on the recent resignations of Upko deputy president and Tuaran Member of Parliament Datuk Wilfred Bumburing and several other members from the party, which is a member of BN, he said that one of their main grievances for their leaving was the immigration problem in Sabah.

Dompok, who is also plantation industries and commodities minister, said this to reporters after officiating the basic course on cocoa planting technology and the presentation of incentives for new cocoa and pepper cultivation here today.

Asked if he expected more Upko members to join Bumburing’s footsteps, he replied:

“I don’t know...there is a lot of speculation. But, of course, this is a free country. You can join any party you like and people will be joining us (at Upko) also.”

He regretted the recent resignations but hoped the federal government would handle specific issues affecting Sabah in a forthright manner.

Upko started as ‘Parti Demokrat Sabah’ (PDS), which was founded by Dompok and other leaders who branched out from Parti Bersatu Sabah (PBS) soon after the Sabah state election in 1994. Later, it was renamed Upko.

In early June, Prime Minister Datuk Seri Najib Razak said the government had agreed to set up a Royal Commission of Inquiry to investigate problems related to illegal immigrants in Sabah, and that the Attorney-General’s Chambers had been entrusted with the responsibility to come up with the terms of reference.

Najib said the government was committed to resolving the issue as it could affect the well-being of the people of Sabah. (Bernama)