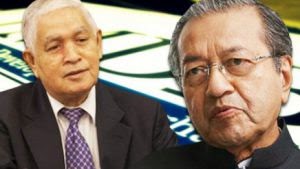 He urged that a Special Investigation Force be set up to re-hear Witnesses 10 to 15 stated in the Report, outlined on Pages 58 to 66, and W202 viz. Abdul Aziz Shamsuddin, the political secretary to Mahathir when he was Prime Minister. “Ops Durian Buruk from 1992 to 1995 was a stepped up operation to register illegal immigrants as voters.”

“1MDB has overshadowed the RCI Report and is being deliberately sensationalised to pull the wool over the eyes of the people in Sabah,” reiterated Mat Zain. “It’s clear the Report has strong evidence on the wrongdoings of Umno leaders, and those high up in the Federal Government, and both are linked with the role of Mahathir.”

The former KL CID Chief was expressing his thoughts in an Open Letter addressed to de facto Law Minister Nancy Shukri with copies to the Chief Secretary to the Government and the Attorney General.

It’s uncertain what the follow-up action on the Report will be, added Mat Zain, but what is clear at this juncture was that nothing would come out of the 1MDB scandal. “No action will be taken against Prime Minister Najib Abdul Razak or members of his family. Only Tony Pua and Rafizi Ramli, the two opposition MPs, will be made to suffer for talking about it.”

“1MDB is nothing when compared to the US$100 billion scandal involving the transfer of Blocks L and M by then outgoing Prime Minister Abdullah Badawi to Brunei. Mahathir himself raised the issue and then strangely fell silent.”

Mat Zain’s reservations on the Report stem from his suspicion that Najib and the Attorney General have conspired to protect those responsible for Projek IC in Sabah and shield them from being brought to justice.

“It’s not only the people of Sabah who can express their disappointment that the Report shields the culprits from the law, many Malaysians as well are unhappy with the misdeeds of the Federal Government and its manipulation of the Federal Constitution and the laws,” said Mat Zain.

One important point to note, continued Mat Zain in the Open Letter, was that both Najib and the AG deliberately worked the Terms of Reference for the RCI Panel to be weak. The RCI Panel, he stressed, had to do their work with one hand tied behind their backs. “The Terms of Reference are meaningless, loose and a sheer waste of time.”

“Under these circumstances, Najib and the AG have engineered the RCI in such a way as to ensure its failure.”

He expressed amazement that RCI Panel Secretary, Saripuddin Kasim, had claimed during the release of the Report that “tidak ada satu titik pun yang diubah dalam laporan tersebut” (not a single dot has been changed in the Report).

“He probably doesn’t know about the various previous RCI Reports which have been changed.”

The RCI on the Black Eye incident involving then sacked Deputy Prime Minister, Anwar Ibrahim, was changed, Mat Zain cites as an example. (Free Malaysia Today)
Posted by sabahkini.net at 12:39