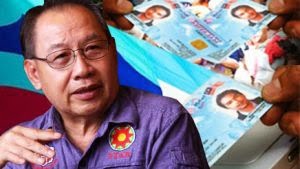 “The presence of illegals as voters have made elections, at least in Sabah, to be a farce.”

KOTA KINABALU: The illegally issued ICs to ineligible foreigners and their entry into the electoral rolls is treason of the highest degree. In many countries, the wrong-doers would have been shot, hanged or beheaded. PAS Sabah has in fact called for the perpetrators to be hanged for treason.

“If we base the findings of the RCI Report on the Court’s decision in the 1999 Likas Election Petition, there is no doubt that the present Umno/BN Federal and Sabah governments are illegitimate,” said Star Sabah Chief Jeffrey Kitingan.

He was commenting on the on-going debate in social media, in the wake of the release of the Royal Commission of Inquiry (RCI) Report last Wednesday on whether the Sabah and Federal Governments were legitimate.

The present leaders, according to Jeffrey, do not care about the future of Malaysia and Sabah.

“The presence of illegal as voters have made elections, at least in Sabah, to be a farce,” said Jeffrey. “To retain power, the Umno/BN government went to the extent of giving away the political franchise and voting rights to foreigners, depriving locals of the right to determine their elected representatives and elected government.”

As a result of these dubious voters and voters-for-hire, there are at least two cases of Umno candidates, including a former Chief Minister, winning in the 1994 elections, defeating Parti Bersatu Sabah (PBS) candidates, he added. ”The decision of the High Court in the 1999 Likas Election Petition ruled that any seat won with the aid of illegal or phantom voters is null and void.”

The Umno/BN Sabah governments have no moral or legal authority to form the government if the Umno seats and other BN seats won with the aid of the illegal voters are declared null and void, pointed out Jeffery. “Umno/BN cannot form the present Federal Government without the 23 BN MPs from Sabah including Labuan.”

Jeffrey questioned whether the present Umno/BN Federal and Sabah governments should be allowed to continue ruling.

“Can the Umno/BN Federal and Sabah governments be trusted to do the right thing to correct the problems identified in the RCI Report and solve the illegally issued ICs and illegal voters?” he asked.

He noted that a Federal Minister from Sabah pointed an accusing finger at Sabahans as causing the illegal problem while at the same time telling them not to point fingers at the Federal Government. “He went on to suggest that the people of Sabah should assimilate these illegal foreigners,” fumed Jeffrey.

The decision of the people is very obvious, continued Jeffrey. “Even if the people decide, the Umno/BN will not listen and carry out the wishes of the people. The people want the demographic changes reversed.”

They couldn’t even decide to set up the RCI until 2012, stressed Jeffrey, despite the many calls since 1985/86. (Freemalaysiatoday)
Posted by sabahkini.net at 00:38