Illegal immigrants: What is Pairin waiting for? 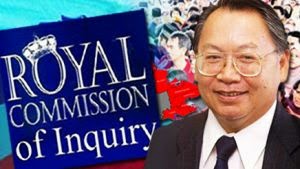 He can act on the RCI report without waiting for further instructions from Putrajaya.

During the recent PBS Congress, the Prime Minister offered Tan Sri Joseph Pairin the means to resolve the illegal immigration problem by asking him to chair a committee to recommend actions to take after the release of the Royal Commission of Inquiry (RCI) report. But instead of getting down to business – such as establishing the necessary mechanism and getting the necessary powers and authority – PBS went to make a police report because it was unhappy that the RCI did not adequately address the question of Project IC. It appears that PBS is more interested in getting cheap publicity than seeking solutions.

Pairin must remember that the PM’s offer was made not to the President of PBS, but to a Deputy Chief Minister of Sabah because the problem of illegal immigrants is a Sabah problem, not a PBS problem.

So far, all we have from PBS is the statement by its Kawang Vice Chief II that the Working Committee to be chaired by Pairin has yet to be officially set-up. It seems the PBS Supreme Council is waiting for Putrajaya to finalise the appointment of the committee and its Terms of Reference (TOR). In other words, PBS is waiting for the TOR before deciding whether Pairin should take up the post.

What Pairin is doing is to procrastinate. Why is Pairin waiting for Putrajaya? This is a Sabah issue. As such Pairin is the authority to decide whether there is a letter of appointment or not and whether a TOR is available or not. It is not for Putrajaya to do his work for him. An offer was made publicly by the Prime Minister and yet Pairin is still waiting to be told what to do next.

Is this the calibre of leadership we have in Sabah? To top it all, Pairin is also a Deputy Chief Minister. Perhaps Pairin may not know exactly what he should do next. If this is the case, then perhaps I may suggest a few things for Pairin to ponder.

First and foremost, Pairin has been singled out at a public function to create a Working Committee on Foreigners. He should come up with the TOR himself and submit it to Putrajaya. Pairin and PBS are better acquainted with the issue of illegal immigrants than Putrajaya is. The keyword here is “proactive”.

Second, Pairin must get the right people to form his Working Committee, people who understand Sabah history well and its legal systems in relation to the national systems. Most important of all, the people he selects must also understand the formation of Malaysia, the Inter-Governmental Committee Report and the Malaysia Agreement 1963. Unless the people he selects have a proper understanding of these issues, his committee will not do any justice to Sabah and its 51-year problem. The reason is that there are so many intertwining social, economic and legal issues that must be taken into consideration before any recommendation for solutions are made.

Everyone knows that the issue is an Immigration nightmare, but the solution is not just simply “arrest and deport”. The Working Committee should also consider the possibility of parents being arrested and deported. What will happen to their children? Or what if a husband is arrested and deported? What happens to his Sabah wife? What happens if he has four wives? What will happen to their children?

We need a holistic approach. Otherwise, we will end up with more street children.
Then we should also ask hard questions as to how many of our own lawmakers were holders of IMM13 papers and how many of our own law enforcement officers have second and third wives who are illegal immigrants. How then do you propose to reconcile and resolve these entanglements?

Third, thinking that these issues are just an immigration problem and should be resolved by the Immigration Act 1959/63 is just myopic. The legal aspects of it are interrelated and cover a spectrum of statutes. Do not expect a PBS Vice Chief II from Kawang to even comprehend the magnitude of the legal fur ball that is involved in this exercise. Among other laws, it involves:

Fourth, Pairin should not appoint just anybody to his Working Committee. They must be apolitical but have vast experience and deep understanding about Malaysia, specifically Sabah. The people do not want to see the likes of Datuk Shafie Apdal or the vacillating Datuk Abdul Rahman Dahlan.

Therefore, this job is not just for any law practitioner, law enforcer or public figure. It requires the service of long serving law enforcers, law practitioners, especially judges who have handled a lot of cases such as these and public figures of impeccable repute. There are a few persons that can fit the bill perfectly. One of them is Datuk Nurchaya binti Haji Arshad, Judge of the High Court in Malaya/Sabah/Sarawak and another is former Deputy Inspector General of Police Tan Sri Mohd Bakri Mohd Zinin.

If prominent and credible public figures from Sabah sit in the Working Committee, I am confident they would be able to contribute to make this exercise successful. Furthermore, I am certain that when Sabah calls on them to do their duty, they will respond positively.

However, for now Pairin must first respond to the national call and stop procrastinating. (Free Malaysia Today)