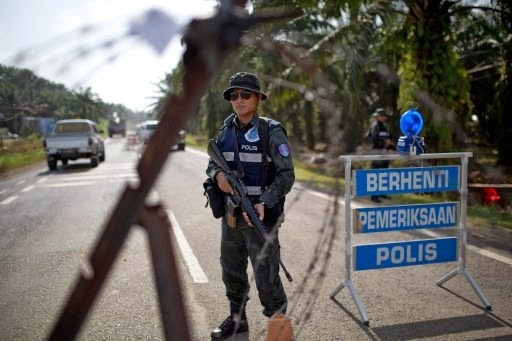 “I saw Corporal Ikhwan and Pabblo talking and then Pabblo turned around as though he was trying to escape.

“But Ikhwan stopped him with the assistance of Constable Khaireyl,” he said.
The prosecution’s 56th witness was testifying in the trial of 30 accused, including Pabblo, who are charged with various offences in connection with the intrusion by armed men at Kampung Tanduo, Lahad Datu in February last year.

The witness said prior to Pabblo’s arrest, he had instructed Ikhwan and Khaireyl to enter the vicinity of the suspect’s house at 5.15 pm, while he and the team waited some 50 metres away.

Asked by deputy public prosecutor Mohd Dusuki Mokhtar as to why he had instructed the two policemen to enter the area first, he explained that Ikhwan and Pabblo knew each other.

Mohd Azwan said after getting a signal from Ikhwan that the suspect had been arrested and led into the police vehicle, he and the rest of the team, which had been split into three groups entered the area.

One group cordoned the area, while his group and the third group entered the wooden house on stilts, where they found three men, a woman believed to be Pabblo’s wife and a little girl believed to be his granddaughter.

Mohd Azwan said he ordered Pabblo to be present while the police searched the house for documents and items linking the suspect to the intruders at Kampung Tanduo.

“At first, we found nothing. I asked Pabblo where he kept his documents and items, but he did not cooperate,” he said.

The witness said he discovered a door that had ‘blended’ with the walls of the living room that was painted yellow.

There was a padlock on the door but when he asked Pabblo and the woman for the key, they told him that it was missing.

“We then broke down the door by kicking it several times and found a small room about an arm’s length wide and the length, twice the size of the room’s width,” he said.

He said the room was messy and contained a cupboard, while several machetes were on the floor, besides several documents and items related to the Sulu Sultanate.
The investigating officer told the court that ASP Zabidi Osman (Beluran Special Branch chief) had earlier instructed him to seize any items related to the Sulu Sultanate, Sulu army recruitment forms and weapons.

In the dock today were 27 Filipinos and three local residents who are facing one or multiple charges.

They allegedly committed the offences between Feb 12 and April 10, last year.
The hearing before Justice Stephen Chung at the Sabah Prisons Department continues tomorrow. — Bernama