Plenty of smoking guns on illegal migrants in Sabah 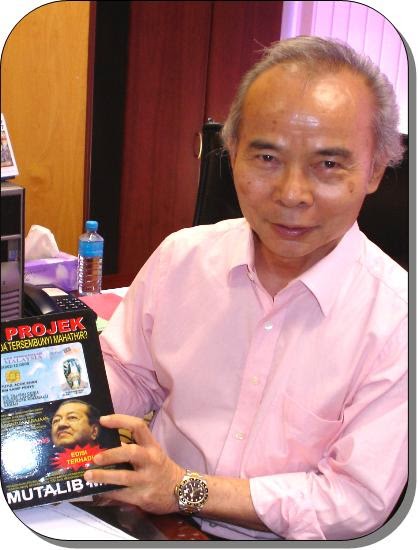 COMMENT On page 267 of the royal commission of inquiry (RCI) report, it is stated that “Indeed, as far back as 1999, it was already reported in local newspapers in Sabah that it was a lucrative business being involved in fake ICs or genuine ICs illegally issued. There was much money to be made by syndicates or individuals or corrupt officials because a false IC could fetch between RM400 and RM500, and a Malaysian passport could cost up to RM50,000.”

Some people have claimed that a lot of activities associated with the illegal immigrants in Sabah represent an industry, and present opportunities and temptation for corruption. Corruption is a big problem in this country. It is also very costly.

I also hear of illegal immigrants becoming victims of enforcement personnel. They become part of the problem rather than the solution. Their vulnerability is often taken advantage of. I have heard stories that very often, enforcement personnel, usually towards the end of the month, demand to inspect the purses of illegal immigrants and take away some or all their monies.

Let me briefly make some comments on the RCI and its report. The RCI is the latest attempt by the federal government to show the public that it is doing something to resolve what is perceived to be a government-created problem for Sabah. Perception, being what it is, could be real or imagined.

But in the Sabah case, there are many signs of smoking guns. The problems associated with the illegal immigrants are often described as the mother of all problems.

The unusually large population of foreigners, both legal and illegal, has permanently changed the economic, social, cultural, political and demographic landscape of the state. Many of them were initially illegal but became legal, rightly or wrongly.

By my reckoning, there are in Sabah more foreigners than locals, who feel fearful and threatened. I have some indicators for this but time does not permit me to elaborate. This is not surprising because this issue has been in the making for more than 30 years.

There appears to be lack of political will on the part of the government to resolve the problem once and for all. More and more Sabahans are convinced that this is a deliberate move or agenda for Sabah by the federal government.

During the late 60s and early 70s, plenty of Vietnamese refugees landed in the peninsula. They were confined to Pulau Bidong, off the coast of Terengganu. Within two years, they were all deported to other countries. The government was very pro-active.
At about the same time, illegal immigrants from the southern Philippines and Indonesia also started to come to Sabah. Unlike the Vietnamese, they are still in Sabah today. There appears to be double standard in the treatment between the non-Muslim Vietnamese and the mostly Muslim Filipinos and Indonesians.

Malaysia is neither a state party to the UN Convention Relating to the Status of Refugees 1951, nor the 1967 Protocol. This being the case, all refugees are treated as illegal immigrants.

All the moves, actions and pronouncements by government leaders have so far not produced the desired results. At one time the government declared an amnesty. It was extended several times so much so that the illegal immigrants did not take it seriously. No review was carried out to assess its effectiveness.

From time to time, you hear of some illegals being arrested and placed in the temporary detention centres. They have now become temporary on a permanent basis. Occasionally you hear of raids and deportations but the number of illegal immigrants appears to increase rather than decrease.

There is no basis to blame the illegal immigrants for being in Sabah. As human beings, they are looking for a better life and opportunities. They have human rights, no more and no less than any Malaysian. Their human rights must be respected. Human rights have no borders.

The question many genuine Sabahans ask is – why are or were they allowed to enter the state illegally and move around with impunity? It is believed that hundreds of thousands of them have been granted citizenship as well as the right to vote, in return for their support for the Umno-dominated BN government.

Former chief minister Yong Teck Lee had to vacate his Likas state assembly seat because he won it in 1999 with the help of phantom voters. Justice Muhammad Kamil Awang said that the 1998 electoral roll for the constituency was illegal, and the election held in March 1999 was null and void. The judge, among others, stated that the evidence adduced represented the tip of an iceberg.

The logical and correct move by the government would have been to rectify the tainted electoral roll. Instead, the Election Act was amended whereby once the electoral roll was gazetted, it cannot be challenged in any court of law. This is bad law and inconsistent with democratic principles.

Why should a responsible government be unwilling to clean a tainted electoral roll if it has no sinister motive?

As the 13th general election was approaching, the government finally announced the establishment of the RCI on Feb 8, 2012, but without the terms of reference. I found this rather odd. It was like putting the horse before the cart.

Initially, the RCI was given six months to come up with the report. It had been the hope of many Sabahans that the report could be known before the general election. In the event, it was extended for another six months.

The report was submitted to the Agong on May 14 this year. It was finally released in Kota Kinabalu on Dec 3 by the chief secretary to the government. As a civil servant, it was surprising for him to conclude that there is no political motive involved, despite all indications to the contrary. Even the RCI was silent on it. The chief secretary did not back his contention with hard evidence. One gets the impression that he was playing politics.

The public expected the report to be tabled and debated in Parliament.

Despite the reservations shown by many towards the RCI, the evidence adduced from the witnesses had endorsed what many Sabahans have suspected all along but denied by government leaders. What was disclosed by witnesses was not surprising. What is surprising is that the government appeared to be uncaring and insensitive to the welfare and interests of Malaysians in Sabah by placing the interests of foreigners over theirs.

In short, the RCI has cleared the real culprits – the government and political parties – of any wrongdoing. Instead, the RCI pointed the finger at civil servants. This is very surprising. The main function and responsibilities of civil servants is to translate government decisions and policies into action. They operate under the principle of ‘I am your obedient servant’.

Even if they are doing wrong, either deliberately or inadvertently, surely they cannot escape from government notice and attention for over 30 years.

Experience and events also indicate that the government was aware of what was happening. For example, the decision to establish the federal task force was made by the PM himself. I was present when the decision was made. I welcomed the move but I was disappointed that it took about one year just to create the post of the head of the task force. Yet the task force was supposed to resolve the issue once and for all.

That is why I am convinced that the federal government is not serious in solving the problem. There is so much disconnect between declared intention and actual action. It has been said ‘a man of words and not of deeds is like a garden full of weeds’.

I believe the task force is still in existence but so is the problem, only bigger and more complex.

In so far as the ‘Projek IC’ is concerned, the RCI concluded that it “probably existed” despite the availability of hard evidence to suggest that it definitely existed. The question of probability should not arise. The existence of ‘Projek IC’ is an open secret to the ordinary Sabahans.

Right-minded Sabahans who were looking for relief and justice would be shocked and disgusted with the report. It is a very disappointing report, to say the least.

It looks odd that in the report the term ‘royal commission of inquiry’ appears, yet on the cover it is being referred to as report of the ‘commission of enquiry’. The chairperson and the commissioners also did not sign the report. Other reports which I have seen are much more dignified.

The RCI agreed with the proposal by the National Registration Department (NRD) workshop to establish a permanent secretariat supported by a management committee on foreigners. It is surprisingly a very short recommendation and not even original.

Only time will tell whether or not this is the last of illegal problems in Sabah following the release of the RCI report and the implementation of its recommendations. In government circle, it is not unusual that when no one is brave enough to take tough decision involving strong political will, a committee would be formed.

That committee, in turn, forms sub-committees. Responsibility is diluted. More often than not, it is taken over by the passage of time.

I am reminded of the story of four people: Everybody, Somebody, Anybody and Nobody.

There was an important job to be done and Everybody was asked to do it. Everybody was sure Somebody would do it. Anybody could have done it, but Nobody did it. Somebody got angry about that because it was Everybody’s job. It ended that Everybody blamed Somebody when actually Nobody asked Anybody.

Finally, you may then ask – what should be done? The illegal immigration issue is a national problem. They should be equally distributed among all the 13 states. It is not fair that Sabah alone shoulder the burden.

Foreigners who obtained ICs illegally should be deported but allowed to return with proper travel documentation if their services are needed.

I realise this will be a massive exercise but it is necessary. A massive problem requires a massive solution. It is the government which made its bed, it must be prepared to lie on it. This is responsibility and accountability.

If the federal government was pro-active right from the beginning by not allowing illegal entry into Sabah, we would not be saddled with this problem today. But it was allowed to happen and continue for more than 30 years. I will not be surprised if many of the illegal immigrants have moved to other parts of the country in search for better opportunities.

Sabah is their entry point into Malaysia and to the rest of the world, courtesy of the federal government.

SIMON SIPAUN is former state secretary of Sabah and former Suhakam commissioner. The above speech was given at the Bersih/Pacos forum on the RCI report in Kota Kinabalu on Dec 13.