AG : No secession but people can decide 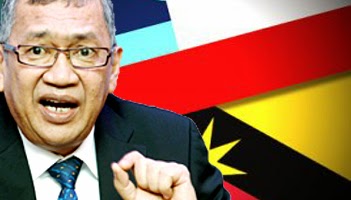 “It cannot now be for a disgruntled minority to unilaterally change the 20/18 Points which rule out secession.”

KOTA KINABALU: Attorney General Abdul Gani Patail reminded the opening of Legal Year 2015 for Sabah and Sarawak at the High Court here on Fri that the disgruntled minority cannot ignore the fact that the 20 Points, if not the 18 Points, being constitutional documents on Malaysia, do not allow for secession from the Federation.

“It cannot now be for a disgruntled minority to unilaterally change it,” he said.
The Attorney General recalled that he had stressed on other occasions, that if there was consensus for change, let it be done by the people affected.

“More importantly, let it be done through an agreed constitutional mechanism without infringing parliamentary democracy,” he added.

“But if the issue is really about how the constitutional safeguards for Sabah and Sarawak are being implemented, than the arguments and debate should be focused accordingly and discourse carried out rationally.”

Secession of Sabah and Sarawak from Malaysia, he belaboured, goes against the spirit of federalization and, arguably, was seditious.

“The memoranda containing these safeguard conditions were considered by the Inter-Governmental Commission set up on the recommendation of the Cobbold Commission in 1962.”

The safeguard conditions, with some modifications, were included in the Malaysia Act, the Federal Constitution and the Constitutions of Sabah and Sarawak.

“These are historical facts and they are recorded for posterity in the relevant reports of these Commissions. They should be read, appreciated and properly understood by every succeeding generation of Malaysia,” said the Attorney General without explaining whether 1963 was self-determination, under international law, for Sabah and Sarawak.

The Attorney General did not touch on the position taken by activists in Sabah and Sarawak that Article 1 of the Malaysia Agreement 1963, calling for a new Federation called Malaysia as an Equal Partnership of Sabah, Sarawak and Malaya (with Singapore incorporated through merger), and a new Constitution, was never implemented.

Instead, they point out with reference to Article 1(1) of the Federal Constitution and Article 160 on the definition of Federation, that Sabah and Sarawak were dragged in as the 12th and 13th states of the Federation of Malaya, which renamed itself Malaysia.

This, according to them, was not the intention of the Founding Fathers in Borneo, and not what the people want.
Posted by sabahkini.net at 23:30