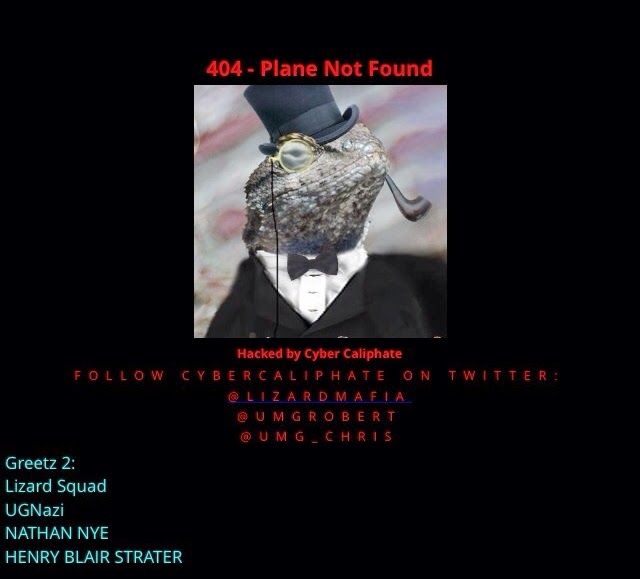 The front page of the Malaysia Airlines website as seen on a mobile device, as at 10am this morning. – January 26, 2015.

Hackers allegedly linked to the Islamic State of Iraq and Syria (Isis) militant group today broke into the website of Malaysia Airlines.

"Plane not found," said a message on the front page of the national airline's website at www.malaysiaairlines.com this morning, signed off as "Cyber Caliphate", as a rap song played in the background.
The website title was also changed to "Isis will prevail".

It is understood that only those using Telekom Malaysia's Unifi service are taken to the hacked page.

Some experts believe today's attack on the MAS website appears to be a DNS redirect rather than an all out hack.

MAS did not immediately respond to a request for comment.

According to an AFP report, the hackers claimed to be from the "Lizard Squad", a group known for previous denial-of-service attacks.

The Lizard Squad is a group of hackers that has caused havoc in the online world before, taking credit for attacks that took down the Sony PlayStation Network and Microsoft's Xbox Live network last month.

The Islamic State, an extremist Sunni Muslim group, has seized large swathes of Syria and Iraq, where it has declared an Islamic "caliphate".

It has drawn thousands of fighters from across the globe to its anti-Western cause, and shocked the world with its video-taped executions of journalists and other foreigners it has captured, the most recent being a Japanese security contractor it claimed Sunday to have beheaded.

A second Japanese captive being held by the militants has also been threatened with execution.

The Isis group, which uses social media in recruiting and spreading its message, is believed to harbour ambitions of launching a cyber-war against the West.

It is unclear why MAS was targeted but the hacking group said on its Twitter feed that it was "Going to dump some loot found on malaysiaairlines.com servers soon."

AFP added that MAS had released a statement confirming its Internet domain name had been compromised, re-directing users.

"At this stage, Malaysia Airlines' web servers are intact," it said, but added it could take nearly 24 hours to fully resolve the issue, which it had reported to Malaysian authorities.

"Malaysia Airlines assures customers and clients that its website was not hacked and this temporary glitch does not affect their bookings and that user data remains secured," it said.

Concern has been rising in the country after scores of Malaysians were lured to the Isis cause in the Middle East.

Malaysian authorities last week said they had detained 120 people suspected of having Isis sympathies or planning to travel to Syria. (The Malaysian Insider)
Posted by sabahkini.net at 14:29