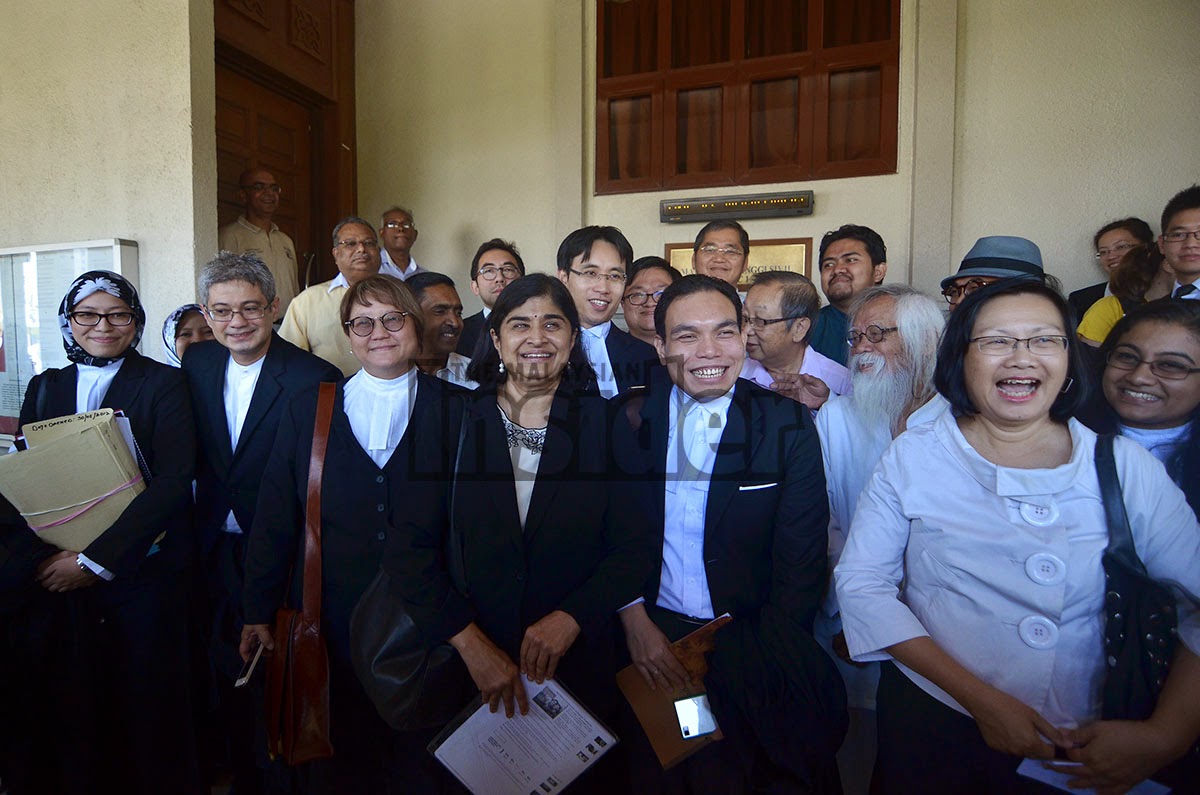 The High Court has dismissed the federal government's claims against electoral reforms group Bersih for damage to properties during its 2012 rally in Kuala Lumpur, saying Putrajaya was unable to prove on the balance of probability.

In May 2012, Putrajaya took the unprecedented step of suing then Bersih co-chair Datuk Ambiga Sreenevasan and the group's steering committee members, as rally organisers, for damages of RM122,000.

“The plaintiff (government) charges that the defendants failed to carry out their statutory responsibility when the assembly went out of control and turned into a riot, causing damage to the vehicles, mostly belonging to the police and repair cost amounted to RM122,000," said the suit.

The government filed its suit against Ambiga under Section 6 (2) (G) of the Peaceful Assembly Act 2012 which states that organisers must “ensure that the assembly will not endanger health or cause damage to property or the environment”.

But in June 2012, Ambiga filed a counter suit against Putrajaya, alleging that the government had breached her constitutional rights.

Among other things, the former Bar Council chair charged that the PAA was against the Federal Constitution, particularly Section 6 which she said restricted her right to freedom of assembly.

O'Hara also allowed a claim for unlawful arrest, detention and assault by police against Wong Chin Huat, a member of the steering committee and awarded him RM 21,000 in damages.

The judge awarded Wong another RM30,000 in costs.

He also dismissed Putrajaya's claim for a declaration that as organiser of the rally, Bersih must be held responsible for damage cause to public property, including police vehicles.

"It is clear to this court that the damages that occurred only happened after Ambiga had called off the rally.

"Moreover, it was not shown to the satisfaction of the court that the damages that occurred were actually caused by the legitimate participants of the rally or by independent agent," he added.

O'Hara said vicarious liability did not have any effect on the organiser based on the facts and evidence in this case.

"There was also the issue of the acts and omission of the police that invariably contributed in the damage for which the plaintiff now claims," he added.

He said therefore to hold the organiser liable would not only be going beyond the scope, ambit and intention of Section 6 (2) g of the PAA but would also be against the evidence tendered.

Also, Section 7 (a)(V) of the PAA stated that the plaintiff ought to go after the actual perpetrators of the damages caused and loss suffered.

Ambiga later told reporters that the judge made some significant comments about the contributory conduct of the police.

"It is a vindication of Bersih and of the people's right to assemble and a very positive day for Malaysia and  I hope the government does not appeal," she said.

"I think the judge made it clear that whatever it was, the government had to prove its case against the particular individuals."

"Instead, we have always said that if someone commits an act of violence they must face the full force of the law. But you (police) go after the right people," added Ambiga.

Wong said the compensation awarded to him was meaningful to all participants of peaceful assemblies as the policemen have made it their modus operandi by not wearing their name tags and numbers.

"But this suit goes to say that when I was bashed up by policemen, the force is not spared from responsibility," he added.

He said the ruling also meant that the police as law enforcement agency was not above the law.

"They have a responsibility and in my case the police officer did not tell me under what law I was arrested and detained," he added.

Wong said the RM21,000 would go to a freedom fund set up by Bersih vice-chairman Thomas Fann in support of any Malaysian affected in exercising his constitutional right.

Bersih co-chair Maria Chin Abdullah said while the decision was welcomed, it was a waste of public funds, time and effort.

"It is already guaranteed in the constitution that we have this right to assemble peacefully. But to pursue a case against us is unnecessary," she said.

Maria hoped that Putrajaya and the police would learn from this episode to facilitate the rights of citizens to demonstrate peacefully.

"Bersih will continue to hold rallies in pursuit of clean and fair elections," she added. – January 30, 2015. (The Malaysian Insider)
Posted by sabahkini.net at 15:18