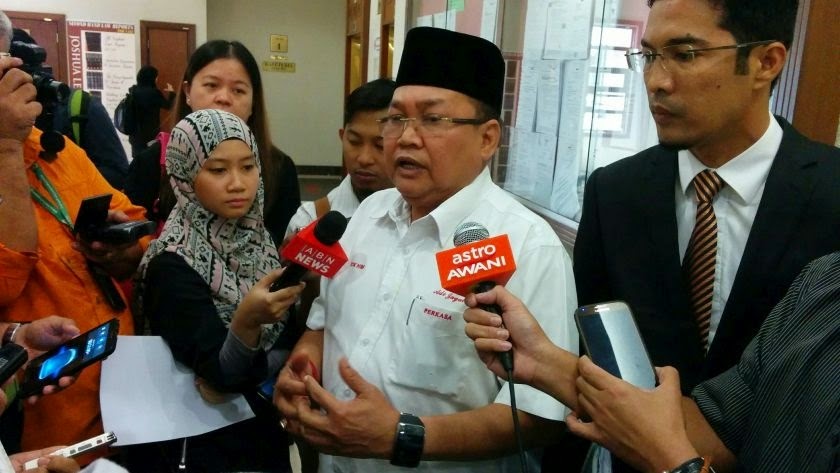 KUALA LUMPUR, Jan 28 — Perkasa president Datuk Ibrahim Ali was back in court today to file yet another defamation suit, this time against a federal minister for allegedly accusing the Malay rights group of fanning racial tension.

Ibrahim is suing Minister in the Prime Minister’s Department Tan Sri Joseph Kurup over a critical statement the latter issued on Christmas Eve, which the Perkasa chief categorised as “seditious”.

"We have come to court to prove these allegations against us," Ibrahim said.
"Perkasa is not chauvinist, Perkasa is not racist," he added.

Last month, Kurup, the minister in charge of unity and race relations, urged the Attorney-General’s Chambers to reopen the case on Ibrahim's threat to burn Bibles, saying this would prove that the government is serious about racial unity.

Ibrahim again defended his call to burn the Bibles, saying that this was the proper way to dispose of the Christian holy text but his words were misconstrued.

"It’s the same with the Quran. If they were old or damaged, we can burn them. We can't just throw it away," he said.

"I'm not about to say that if parents received these bibles, they should just throw it in the drain. That is not good," he added.

The Perkasa chief added that his case should not have been raised again as the Attorney-General has already made a "fair" decision.

He added that insisting that he be prosecuted despite the Attorney-General’s choice was to interfere with the office.

"Then he (Kurup) should resign and be Attorney-General and give the (Cabinet) post to me," he added.

In his suit, Ibrahim claimed that his reputation has been tarnished by Kurup’s description of Perkasa as “bigots” and “extremists” in the latter’s statement last year.

Ibrahim has also issued a letter of demand to Datuk Noor Farida Ariffin, a spokesman for the group of 25 prominent retired Malay civil servants who urged Putrajaya to review usage of Islamic laws in the country, but said she has yet to respond.

The Perkasa chief accused Noor Farida of using derogatory labels against his group in her media statements.

Ibrahim’s blatant calls to burn Malay-language Bibles ostensibly for containing the word “Allah” in 2013 escaped prosecution after the Attorney-General’s Chambers decided the self-professed Malay rights proponent “had no intention to create religious disharmony”. (The Malay Online)