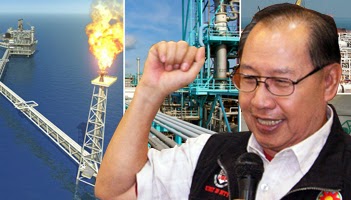 He says Sabahans will be hit especially hard when GST is introduced.

KOTA KINABALU: A 50 per cent drop in the oil price will see a straightforward shortfall of RM573.4 million in Sabah Government revenues and that is assuming there is no reduction in oil production, Bingkor Assemblyman Jeffrey Kitingan has warned.

“Regardless of the revisions by the Federal Government, the Sabah government needs to work out and implement an alternative Plan B for its Budget 2015,” he said in commenting on the Budget 2015 adjustments announced by Prime Minister Najib Abdul Razak yesterday.

“The Sabah government should also take the opportunity to re-look and re-assess its 2015 budget and focus on Sabahans, consistent with the 2015 budget theme of focusing on ‘Sustainable Development for the People’s Well-being’.”

When Najib unveiled the national budget last October, the world oil price was about USD90 per barrel and when Sabah Chief Minister Musa Aman announced the Sabah Budget on November 7, it was about USD80, pointed out Jeffrey. “However, the budget projections were based on the assumption of oil prices at USD100 per barrel. They now seem half a world away from the current USD48 per barrel.”

He noted that in late November, when the world oil price was at USD71, the CEO of Petronas disclosed that it would be bad for Petronas if the price dropped below USD65 and that for every USD1 change in oil prices, Petronas’ pre-tax profit would be reduced by RM1 billion.

“For certain, the current oil price will create a 50% to 60% drop in projected revenues if the prices maintain for the rest of the year. That is bad news for both the Sabah and Federal governments.”

Compounding the problem for Sabahans, he added, was that GST would be introduced in April, which the Federal Government would collect without paying back Sabah’s 40% entitlement.

“This reimbursement could be used for the benefit and welfare of Sabahans. Sabahans already have to pay higher prices for goods due to the unfair cabotage policy and prices will be higher in 2015 with the depreciation of the ringgit making imported items more expensive.”

The only consolation was that petrol and diesel prices would be cheaper, he conceded, “but the cheaper fuel has not translated into lower prices”.

“In fact,” he added, “despite the cheaper fuel price, school bus fares are going to be higher if increases in the peninsula are any indication.”

Jeffrey urged that the Sabah government make a request for the Federal Government to defer GST for Sabah at least for 2015 to give some breathing space for Sabahans. (Free Malaysia Today)
Posted by sabahkini.net at 16:25