LATEST: Floods In Sabah Worsens; 300 In Sinoko Trapped As Evacuees Goes Over 3,000 Mark 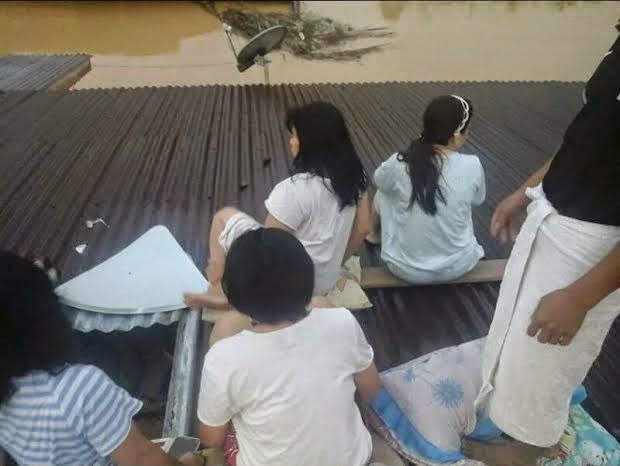 Victims stranded on roof-tops at Kampung Sinoko, Membakut with only the clothes on their backs.
KOTA KINABALU: The number of flood evacuees in Sabah increased to 3,035 people compared to 2,394 people Thursday afternoon, with at least 300 people trapped in two villages in Membakut.

Efforts are underway to send food supplies to the ‘marooned’ villages of Kg Sinoko and Kg. Bambangan after rescuers could not pass through the fast flowing waters from the Crocker Range hills via the normal roads.
Many people could be seen waiting for help on their rooftops at Kg Sinoko, and vehicles almost submerged in the water.
Unconfirmed reports also said that several houses were damaged or washed away in Kg Bambangan due to the flood, though Beaufort police chief Deputy Supt Mustaffa Maarof Mustaffa said they have received such information.

The chief minister lands a hand in dishing out rice to be distributed to evacuees at the at the Membakut new township hall.
Chief Minister Datuk Seri Musa Aman who visited victims at the relief centres and inspected the floods urged people to listen to rescuers and leave their areas as soon as informed.
The situation in Membakut could get out of hand as heavy rain was reported falling at about 9.00pm, as floods worsen for the third day in this south-western district.
About 1, 685 people in the sub-district of Membakut were caught by surprise early Thursday morning when flood water rose rapidly, flooding at least 14 villages.
Beaufort district officer Mohd Shahid Othman said four flood relief centres in the district are sheltering 1,214 people from 396 families.
In the district of Membakut, assistant district officer Sarudin Ismail said 1,694 victims from 604 families were housed in six flood relief centres.
Sipitang assistant district officer Matlin Dullah said a total of 131 flood victims from 35 families remain in the district.
Sabah Education director Datuk Jame Alip said 40 schools in Beaufort, Sipitang and Papar were still closed either due to floods or because they were used to shelter flood evacuees.
Police are now trying to use the army’s TETRA truck to send in supplies to flood-struck victims as soon as possible as helicopters could not be used due to bad weather.
“We are working with various agencies such as the Fire and Rescue Department in rescue efforts,” added Supt Mustaffa Maarof.

Musa listens to Membakut villagers who told him of their plight as flood waters hit several villagers following heavy rain since Sunday.
Musa, when met in Membakut, after a short trip to Beaufort to see the situation there first hand, said he was happy with the relief operations and the coordination by all agencies.
He said floods in Membakut were rare and people did not really move out of their houses immediately when they were warned to leave.
“There is a need to deepen rivers and improve drainage systems in flood prone districts across Sabah,” Musa told reporters at the Membakut new township hall.
Most parts of Membakut were underwater with many roads into the villages in the old town turned into ‘rivers’ while over a dozen schools affected by the floods.
The post office, telekom, power substations as well as railway station were submerged in water while the road to the Membakut police station was over a meter in dept in water.
In Beaufort, over a thousand villagers are still being placed in the four relief centres while waiting for floodwater to recede.
Many roads are still submerged in water though larger automobiles such as four-wheel-drive vehicles can pass through some of the areas.
Heavy rains Wednesday also caused flash floods in Penampang and other low laying areas like Kolombong, Likas, Putatan, and Kepayan.
However no evacuation was required as flood waters remain less than half a meter deep.
The authorities are however keeping close tabs on rivers especially the Moyog River as it is almost overflowed.
Posted by sabahkini.net at 12:56