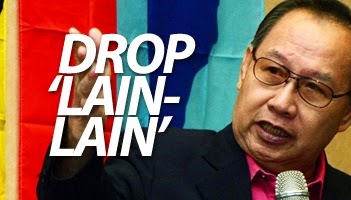 The term “Bumiputera” has no application in the Federal or Sabah Constitutions.

KOTA KINABALU: The Sabah Government should take the cue from neighbouring Sarawak and follow suit to replace the derogatory “Lain Lain” (Others) in Government forms with “Sabahan”.

It also needs to do away with the divisive “Bumiputera Islam” and “Bumiputera Bukan Islam” for the natives and restore the dignity of Sabahans.

Bingkor Assemblyman Jeffrey Kitingan was commenting on an announcement by Sarawak Chief Minister Adenan Satem on the new make-up of Government forms in Sarawak.

“There is no reason to divide the indigenous people by religion except to help Umno/Malaya and Putrajaya to racially divide the natives and marginalise and sideline the non-Muslims,” said Jeffrey who is also Star Sabah Chief.

“The term ‘Bumiputera’ has no application in the Federal or Sabah Constitutions.”

By wrongly implementing the “Melayu/Bumiputera” policy, added Jeffrey, the government is trampling on Article 41 as not every Melayu or Bumiputera is indigenous or native to Sabah.

“A Malay from Malaya or a newly-minted Malay from Indonesia with a new IC/MyKad has no business depriving the privileges and benefits reserved for the indigenous people under Article 41.”

This can be seen from the numerous complaints that Indonesians have taken over and are monopolising the transport, bus and taxi business as well as agriculture and the local “Tamu” (fair) all over Sabah, continued Jeffrey, and Pakistanis with ICs who cannot speak proper Bahasa Malaysia monopolising the food and retail businesses even in the interior and small villages.

”Local natives are deprived of places in educational institutions and unable to secure scholarships which are prioritised for ‘Malays/Bumiputera’ who are not indigenous to Sabah.”

“Malays from Malaya and foreigners re-classified as Malays should not be depriving genuine Sabahans by the government failing to implement Article 41.”

The big question, according to Jeffrey, is whether the Sabah government and Sabah BN leaders will do away with the categorisation of Sabahans as “Lain-Lain” and “Bumiputera Islam and Bumiputera Bukan Islam”.

Will they rise above individual and party political interests and stand up to Putrajaya?

“Will they be proactive in the common interest of Sabahans and the indigenous people while at the same time ensuring that the legitimate interests of the general population are safeguarded?” asked Jeffery.
Posted by sabahkini.net at 12:25