Anwar ‘yes’ for reform, ‘no’ to secession 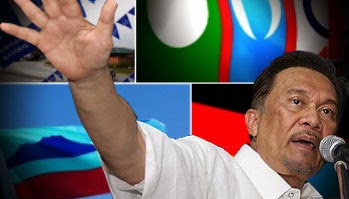 Opposition leader claims state sentiment is the argument of a minority being used “against the rest”.

“The SSKM movement will hinder any attempts to force the Federal Government to re-look the original conditions of the Malaysia Agreement 1963 (MA63),” said Anwar. “It will not benefit us in the long run.”

He was silent on the new Federation and new Constitution mentioned in MA63 and instead claimed that secession was not allowed under the Federal Constitution (the old Malayan Constitution).

“Seceding from the Federation is against the Federal Constitution. States are integral parts of the Federation. It’s clearly stated,” he added. “Do not use this state sentiment because no country in the world would readily concede this argument.”

He claimed that the state sentiment was the argument of a minority being used “against the rest”. “Any attempt to secede from the Federation is unreasonable,” he argued and advised Sabahans to work for change (from within) instead of submitting themselves to a new independent state.

The people in Sabah, said Anwar in referring to his “meetings with them”, are more disenchanted with neglect, marginalisation, poverty and inequality. “They are not so taken up with the idea of secession. I agree with many of the concerns expressed.”

The thrust of the argument in Sabah and Sarawak is that Putrajaya has been party to illegalities in Sabah in particular, as evident in he Royal Commission of Inquiry (RCI) Report.