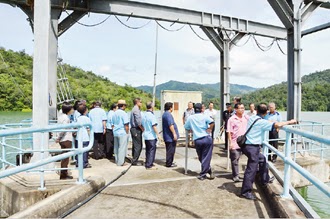 PUBLICISING Native Court cases proved positive for the community by making the present generation of natives aware that their customary laws and traditions are still being practised and enforced.

They also provided greater recognition to the works of the Native Court besides creating awareness on the penalties of offenders.

Former Penampang District Officer William Sampil voiced support for this notion during his farewell dinner in October last year (2014). As District Officer, he was also a presiding member of the District Native Court of Appeal.

Another senior Native Chief told a court reporter that the number of cases submitted had declined while some parties in disputes preferred to be heard in chambers via mediation.

This was evident even though Daily Express avoided sensationalising any cases by purposely omitting the names of both plaintiffs and defendants. There was no case for open hearing from October to the end of the year at the Penampang Native Court.

In early September, the Native Affairs Department held a two-day symposium on Native Laws where it was proposed that more Native Chiefs be trained to settle disputes via mediation rather than court hearing. This is because the parties involved would be expected to reconcile with one another after payment of the "sogit" or customary fine.

After an open court hearing, the winner will go home happy while the loser, after paying the fine, usually maintains a grudge for a long time.

Meanwhile, work on the Native Laws Training Institute building is yet to commence while the Penampang Native Court building near the Post Office has been delayed for more than a year.

The Penampang Native Court became the first to translate the Native Enactments and Rules from English/Bahasa to the native Kadazan language of the district, making it easier for the locals to understand their own "adat".

Looking back at the cases heard in open court, the year began with an average of three hearings per month. It was down to one in September and than none.

The first case took the imaginations of the locals when it was linked to a song by Sharifah Zarinah – Langit ke Tujuh or Seventh Heaven.

Apart from the coincidence of the number 7, the parties involved were considered prominent members of the society.

After dragging for a few months, mostly due to non-attendance of the second defendant, the case failed to reach any settlement. Then the second defendant applied for a stoppage of the proceedings to the State Attorney- General under Part VI, Section 26 of Native Court Enactment 1992 on grounds that is not made public.

It was only known that the plaintiff had also submitted a letter of appeal on this stoppage. No further information was made available if the case will continue this year (2015) or be transferred to another court jurisdiction.

There were six cases of sexual offences where two involved non-native males in Penampang.

This also proved that non-natives could be subjected to the Native Law because the Enactment clearly states that the woman's native "adat" will prevail.

However, for the "Kepanasan Kampung" or appeasement of the village, some village chiefs have insisted that the livestock must be delivered to the village. One offender had offered a cow instead and it was acceptable.

One of the non-native offenders failed to pay a single sen of his fine and was sentenced to six months' jail in absentia.

His brother tried to delay the arrest by coming to court to appeal on his behalf but after the court papers were endorsed and warrants issued, he was promptly sent by the police to the Kepayan Prison.

The woman plaintiff, representing her family, had fought for the return of Lot 2 of a land in Ramayah. The Native Court decided in her favour declaring that only Lot 1 belonged to the defendant.

While waiting for the decision of the District Native Court, the defendant sensed that he would lose again and sell the land to a non-native before the verdict was released.

It remained a mystery on how the defendant was able to do this and is awaiting the police to investigate and further action from the plaintiff.

The Native Court does more than just hear cases in the courtroom or in chambers. They also conduct site visits as part of their investigations into some cases.

In a dispute over a common access road in at Kampung Mahandoi, a team from the court visited the site to ensure that the road is usable to all parties. Still the offending party was chided and fined for a multiple set of offences that included threats to attack, causing extreme fear, slanderous remarks and damages to security CCTV, mechanical shovel and some high valued vehicles.

After accepting the total fines meted by the court and hearing adjourned, the defendant passed by the plaintiff and family with a nasty glare and walked out of the courtroom devoid of any remorse.

Members of the Native Court are even on duty on Sunday when needed. A "sogit" of one buffalo was sacrificed because an old graveyard in Ramayah was supposedly disturbed.

Despite the fact that no grave or gravestones were actually damaged when an access road was constructed at the border of a graveyard reserved, yet to appease the village and the spirits, the "sogit" was offered by the contractor on the advice of the village chief, witnessed by the District Chief himself and another Native Chief and village chiefs from the nearby villages.

Such attention is to ensure that peace is always maintained amongst the living and the dead. Even the local police were invited.

After three major floods in October, members of the Native Court comprising their District Chief, Native Chiefs and all Village Chiefs also visited the Babagon Dam to see for themselves and to assure their villagers that there is no threat to their safety coming from this important water supply reservoir.

The role of the Native Court and their members definitely will not cease even in the so-called modern IT-era.

Rather it needs to be enhanced and empowered. Even if all the people stop having disputes or act like angels, the court still have to entertain a long queue seeking administrative services such as claiming properties, land matters and documents to be endorsed and other problems that only human leaders can solve. (Daily Express)
Posted by sabahkini.net at 00:45