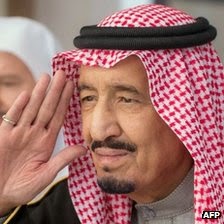 King Salman: "We will never deviate from our constitution"
Saudi Arabian King Salman has pledged continuity, hours after his accession to the throne following the death of his half-brother, King Abdullah.

The new king moved swiftly to appoint heirs and ministers, including one prince from the ruling dynasty's third generation.

King Abdullah died overnight, weeks after being admitted to hospital with a lung infection.

He was buried in an unmarked grave in Riyadh, following Friday prayers.
His burial was conducted in line with the traditions of Wahhabism - the ultra-conservative form of Sunni Islam followed by the kingdom - where funerals are austere and simple.

King Abdullah's body was wrapped in a shroud and taken by ambulance to the Imam Turki bin Abdullah mosque in Riyadh.

Following prayers, which were attended by Gulf heads of state as well as foreign leaders including Turkish President Recep Tayyip Erdogan and Pakistani Prime Minister Nawaz Sharif, his body was taken to a public cemetery and buried. 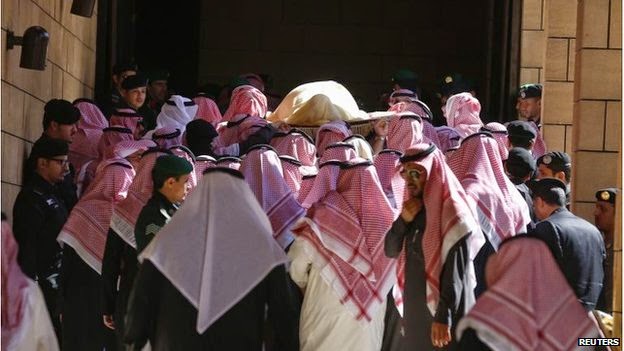 Within hours of acceding to the throne of the oil-rich kingdom, King Salman, 78, vowed to maintain the same policies as his predecessors.

"We will continue adhering to the correct policies which Saudi Arabia has followed since its establishment," he said in a speech broadcast on state television.

The new king's profile was updated on his official Twitter account, where he wrote: "I ask God to help me succeed in my service of the dear [Saudi] people."

He named another of King Abdullah's half-brothers, Muqrin, who is in his late 60s, as the new crown prince.

Interior Minister Prince Mohammed bin Nayef, 55, was appointed deputy crown prince, making him second in line to the throne and effectively smoothing the line of succession for years to come. 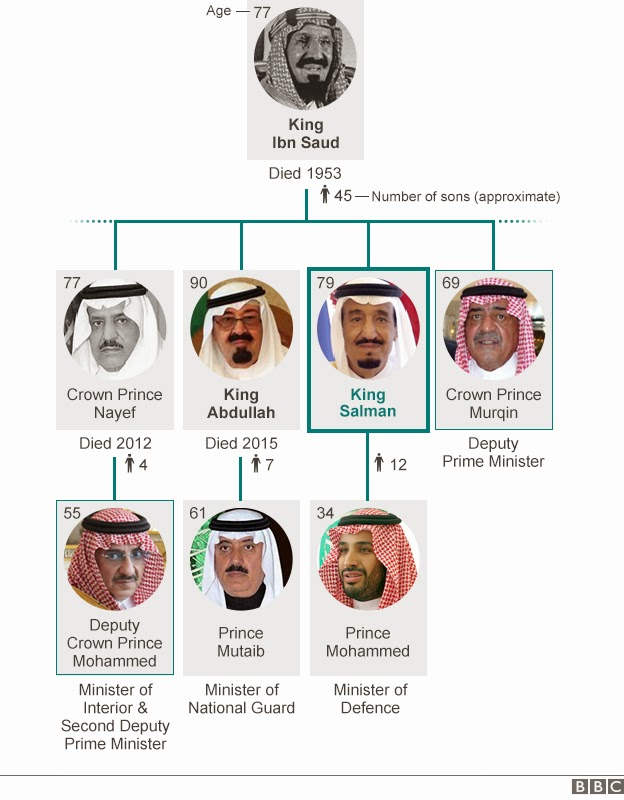 Crown Prince Nayef is a grandson of King Abdulaziz, usually referred to as Ibn Saud, the founder of modern Saudi Arabia. The crown has so far passed between Ibn Saud's sons, but few are still alive.

The funeral of a Saudi monarch is a low-key affair, rooted in the kingdom's ultra-conservative religious practice.

One of the world's wealthiest monarchs - who in life resided in lavish palaces - is buried in an unmarked grave in a public cemetery.

The reason is that the House of Saud practises one of the strictest codes of Islam - known as Wahhabism - in which followers try to emulate precisely the behaviour of the Prophet Muhammad and avoid anything seen as un-Islamic "innovations".

Public displays of grief are frowned upon by a religious establishment which views every aspect of life and death as a submission to God's supreme will.

That means funerals are very austere and puritanical in character, with a strong impression of egalitarianism in death.

The BBC's Sylvia Smith reports from Saudi Arabia's second city, Jeddah, that the streets were quiet as people flocked to mosques for Friday prayers.

BBC security correspondent Frank Gardner says it is thought unlikely that he will embark on any great changes.

In a recent meeting with the BBC in Jeddah, he appeared alert and well-briefed but walked with the aid of a stick, our correspondent adds.

King Abdullah came to the throne in 2005 but had already been Saudi Arabia's de-facto leader for 10 years because his predecessor, King Fahd, had been debilitated by a stroke.

Saudi Arabia under King Salman faces a number of challenges. The first is ensuring the succession passes smoothly without any divisive jockeying for power within the ruling family. Then there is the ongoing threat from jihadists, both at home and across its borders.

Saudi Arabia is now sandwiched between the aggressive Islamic State (IS) group to the north and al-Qaeda in Yemen to the south. Saudi warplanes have joined the US-led coalition in air strikes against IS, but this is deeply unpopular with many Saudis.

The government has yet to find a way to cope with mild calls for reforms, and is abusing anti-terror laws to silence reformers and punish its critics. Longer term, it faces a growing unemployment problem. About half the population is under 25 and there are nowhere near enough meaningful jobs for young Saudis.

But the country does at least have oil in its favour. With prices below $45 a barrel, Saudi Arabia is one of the very few exporting countries to still make big margins on production and exploration. That puts it in a powerful position on the world stage.

Abdullah was said to be aged about 90. He had suffered frequent bouts of ill health in recent years, and King Salman had recently taken on the ailing monarch's responsibilities.

US President Barack Obama paid tribute to Abdullah as a leader who "was always candid and had the courage of his convictions". Vice-President Joe Biden said he would lead a delegation to Riyadh to pay respects.

Israeli President Reuven Rivlin praised Abdullah's "grounded, considered and responsible leadership", while Iran offered Saudi Arabia its condolences and said its foreign minister would travel to Riyadh for an "official ceremony" on Saturday.

"There was a huge public campaign depicting him as a reformist," Sevag Kechichian, Middle East researcher for Amnesty International, told the BBC. "But in reality the facts on the ground are quite different... I can point to a large number of negative developments in just a couple of months."

After 2011, the "authorities subordinated the king's reform agenda to a campaign to silence peaceful dissidents", he added.