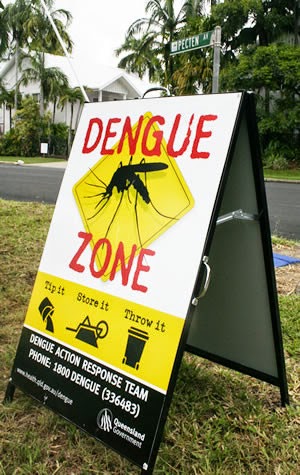 Junz was sad and disappointed that Likas been declared as dengue zone and urged both local authorities, DBKK and community to work together to make Likas a dengue free neighbourhood.

He said that Likas, a wetland status, would apparently need more extra care by both residents and local authority.

However there was no excuse for everyone involved to play their parts responsibly to ensure Likas remain safe and healthy for everyone.

"On the authority part, I urge DBKK to step up the efforts to ensure that "mosquitoes pesticide spray smoke" exercise reaches every Taman especially those areas with many natural trees & rivers.

Enforcement must clean up the drainages to ensure good flow with no blockage, which has caused stagnant water - one main reason why mosquitoes can breed easily!

Tall grasses and untrimmed trees also one of the best conditions for mosquitoes breeding and thus DBKK enforcement should inspect and ensure grasses are cut regularly in order to help cope with dengue situations." Junz advised

Junz who is also DAP Sabah Organizing Secretary said that on the residents side, they should not litter even if it's just a tissue.

Not only that public should even inform the authority if anyone was spotted & caught red-handed, to be littering irresponsibly especially into drainages.

"Tell them off immediately as they are causing huge danger to the society by helping the cause of mosquitoes breeding." Junz said

He emphasized that Likas is an area packed with school and thus our children will be exposed to such danger and they are vulnerable.

He called on everyone to play his / her part to ensure that Likas becomes a free zone for dengue sooner rather than later.

"My political secretary Nicholas Chak will submit an official report to DBKK which are the areas to be needing extra if not immediate action to rectify dengue situations.

Please do no hesitate to contact us at 0128741336 or email us at adunlikas@gmail.com the addresses, relevant details, photos, etc if you want us to enclose your concerns into our report pertaining dengue issue.

We will do our best to ensure Likas remains safe and healthy place for everyone." Junz concluded.
Posted by sabahkini.net at 17:23