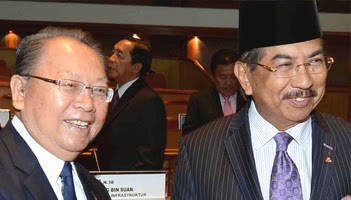 Musa-Pairin meet resolves that all issues can be put on the table and discussed.

KOTA KINABALU: The ruling Barisan Nasional Sabah has resolved that all issues concerning coalition members can be brought up for discussion. This was the outcome of a four-eyed meeting on Friday between Sabah BN Chief and Chief Minister Musa Aman and his deputy and Huguan Siou of Sabah Joseph Pairin Kitingan.

“In the BN, nothing should be beyond resolution. We should keep an open heart and mind in dealing with issues,” said Musa after meeting Pairin in reiterating a guiding principle.

“Of course problems will crop up every now and then. That’s normal within a family with so many members.”

He pointed that there are issues even within a party. “But how we deal with such issues is crucial. My approach has always been . . . we can discuss and try to find a solution that is reasonable and acceptable to all concerned.”

Musa said Pairin had raised several issues during their meeting and he would address them accordingly. He did not elaborate.

Earlier, Pairin had been reported as saying that the allegedly “lop-sided power-sharing with the BN Sabah” is an issue that needs to be addressed but played down the furore raised in the media by his deputy, Maximus Ongkili.

“This is an issue which has been raised now and then and it remains a subject which can be improved on,” he said.

The thrust of Maximus’ complaints is that there have been too many grouses and complaints aired by the people that as a BN component party, the Parti Bersatu Sabah (PBS) is viewed as not playing much of a role in governing the state despite holding the post of Deputy Chief Minister (Pairin). He added that the power-sharing concept practised by the BN should not be mere rhetoric.

Umno Sabah Deputy Chief and Sabah Speaker Salleh Said Keruak, in an immediate reaction, denied that the power-sharing concept in the state under the BN was merely rhetoric.

The BN Sabah has power-sharing guidelines drawn up by a committee headed by Salleh but apparently observed more often than not in the breach. This has placed the PBS in particular in a tough spot as searching questions were being raised in the local media on the role and effectiveness of the party in the coalition.
Posted by sabahkini.net at 19:07