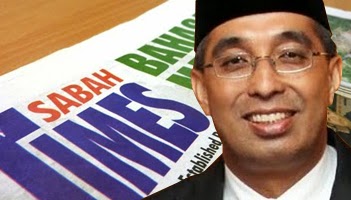 Opposition parties and NGOs are free to criticise the Barisan Nasional or the government in the state media.

“Every day in the Sabah media, opposition parties and non-governmental bodies (NGOs) criticise the Barisan Nasional or the government, and sometimes their articles are published on the front page (of the local newspapers).

“Likewise, state BN leaders, too, are free to rebut their criticism. This scenario has been going on for decades. In other words, Sabah media appears to enjoy the widest margin of press freedom compared with other states,” he said in his talk “The Principle of Democracy – The Right to the Freedom of Expression” in conjunction with the visit of members of the Malaysian Press Institute, here today.

However, Salleh said although the provisions of Articles 5 to 15 of the Federal Constitution clearly outlined the rights to the freedom of expression, it was wrong for anyone to claim that “he or she had an absolute right to do whatever he or she pleases in the name of such freedom”.

For that reason, he said Parliament had provided some restrictions on sensitive matters that could threaten national security.

“In Sabah alone, we have more than 32 ethnic groups with different cultures, races and religions. As such, freedom of expression should not transgress or violate these values,” he said.

Thus, he said democracy in a country like Malaysia with a diverse society must be understood in the context of a conditional freedom.

The former Chief Minister said freedom must come with responsibility, saying “more so in a multi-racial country like Malaysia which still has a lot of sensitive issues”.