Archbishop: Christians can use ‘Allah’ despite court ruling 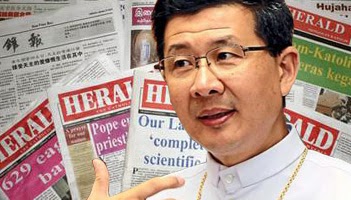 The Government has said that the decision of the Court of Appeal is only confined to the Herald's case.

KUALA LUMPUR: The Archbishop of Kuala Lumpur, the Most Reverend Julian Leow, has assured Christians in a Pastoral Letter, addressed to My Dear People of God, and published on the Kuala Lumpur Archdiocese website that the “Allah” ban was only limited to the Herald, the Catholic newsweekly.

The term can be used in Malay Bibles and during praise and worship sessions, added the Archbishop who is also the President of the Catholics Bishops Conference of Malaysia.

The Government has said that the decision of the Court of Appeal (COA) is only confined to the Herald’s case, added the Archbishop. “We shall therefore take the government at its words.”

ln no way does it (COA), he added, include a prohibition on our Holy Scripture, the Al Kitab as well as in our praise and worship during our celebration of the Holy Mass and prayer sessions.

He quoted Timothy 4:7: “1 have fought the good fight, I have finished the race, I have kept the faith.”

Walking down memory lane, he recalled that Christians had come to the end of a long journey which began in 2008 when they were told that they cannot call God in the way the majority of Catholics in Malaysia have been used to for centuries.

“We mounted a challenge in the court to exercise our constitutional right to manage our own religious affairs,” said the Archbishop. “The Church took the position that the minister’s restriction went against the spirit as well as the letter of our Federal Constitution.”

He congratulated the lawyers for “defending our right to practice our faith unhindered”.

“They presented the issues clearly and succinctly. From the beginning it had been an uphill journey, fraught with many challenges and obstacles,” he said. “Yet, our Team persevered and we have now finished the race. Insofar as the Herald’s case is concerned, we have exhausted the legal process to challenge the Minister’s position which affects all Bahasa-speaking Christians in Malaysia.”

We must now keep the faith, he stressed.

He conceded that “we do not know what the future holds or what the repercussions of the decision of the Court of Appeal will be on the rights of the minorities to practice their faith in the manner they consider in keeping with their religious practice”.

He urged Christians to forgive and to reach out in love especially to those who misunderstand and are misinformed. “It’s only Love that conquers all and God is Love,” he pleaded. “Let us continue to worship and praise such a compassionate and loving God of ours.” (Free Malaysia Today)
Posted by sabahkini.net at 13:01