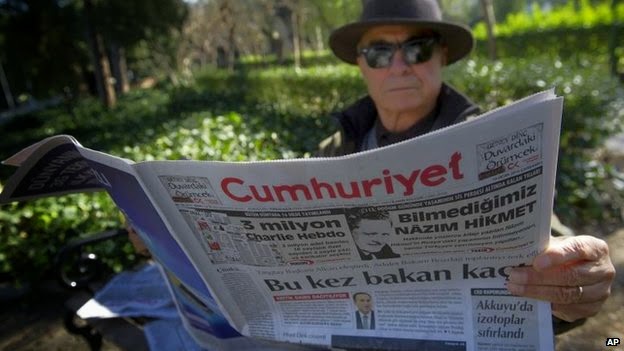 Newspapers across the globe respond to the "survivors' edition" of French satirical weekly Charlie Hebdo - featuring a cartoon of the Muslim Prophet Muhammad - with a mixture of anger, concern and solidarity.

"With new cover of French paper, a new set of fears," says the New York Times on its front page, adding that there is a "dread that Charlie Hebdo may prompt further violence".

In an op-ed piece in the paper, Turkish writer Mustafa Akyol calls on the Muslim world to ease its concept of blasphemy.

"Rage is a sign of nothing but immaturity," he says. "The power of any faith comes not from its coercion of critics and dissenters. It comes from the moral integrity and the intellectual strength of its believers."

Many Muslim Middle Eastern newspapers - even moderate ones - strongly criticise the magazine's front-page cartoon of Muhammad.

In the Algerian daily Echourouk, Habib Rashdin criticises the French government for helping to fund the new edition of Charlie Hebdo, saying this "violates all red lines, and is an open crusade against Muslims".

"It has become every Muslim's right today to file a lawsuit against the country's ambassadors over charges of 'insult and contempt for religion'," he adds. 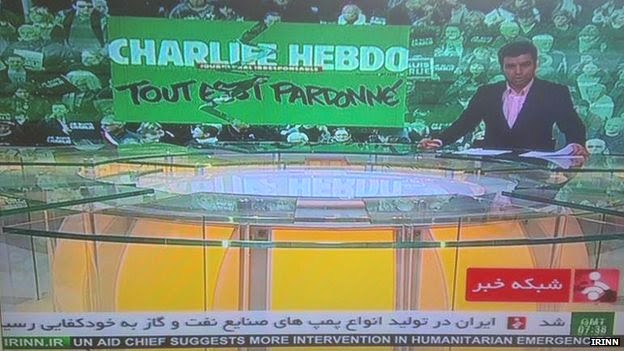 The front page of another Algerian paper, the anti-Islamist Ennahar, features a large picture of a sign saying "Nous sommes tous…Mohamed" ("We are all Muhammad"), in a reference to the ubiquitous declarations of "Je suis Charlie".

Showing part of the cartoon but without Muhammad, Iran's English-language international channel Press TV warns that the cartoon "will stir up more hatred".

In Turkey, Yeni Akit - a paper that supports the Islamist governing party - launches a strongly-worded broadside against Charlie Hebdo and the West in general, under the headline "Ignominy continues".

"Despite the perilous events, the arrogant magazine Charlie Hebdo and the Western media, under the thumb of Zionist powers, carry on their cowardly attacks against Muslims and the Islamic world," it thunders.

But secular opposition Cumhuriyet reprinted four pages of the Charlie Hebdo edition as an act of solidarity, albeit without the front-page cartoon of Muhammad.

The daily's plans prompted a police raid on its printing house on Tuesday evening, although the edition was allowed to go ahead once it was clear that no images of Muhammad would be published.

Two columnists from the newspaper included a smaller version of the cover in their columns online.

Several commentators urge France and other countries to outlaw the insulting of religions and religious figures, saying that failing to do so will only encourage Islamic extremism.

"I look forward to a French law that protects people's sanctities and beliefs from attack and ridicule," Idris al-Driss writes in the Saudi daily Al-Watan.

"Freedom of expression should end at and not cross the limits of offending others over their colour, race or religion," he adds. "Insulting religions should be legally treated as racism."

In the Lebanese daily Al-Anwar, Raouf Shahouri accuses the West of double standards. 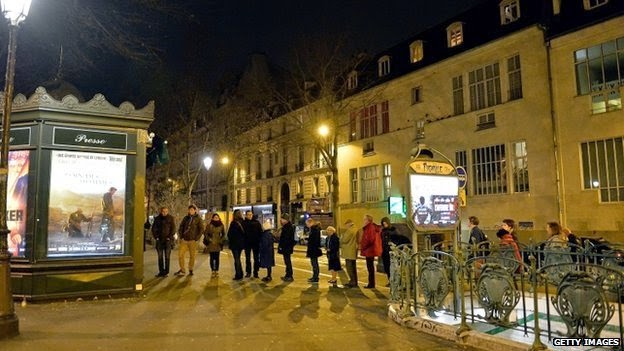 Customers queued for their copy of Charlie Hebdo at this news stand in Pigalle, Paris

He says some countries penalise expressions of anti-Semitism while "seeing no crime in attacking the prophet of Muslims and hurting the feelings of more than a billion Muslims around the world".
"This pattern of half-blind western justice is the major source of terrorism," Mr Shahouri says.

In France itself, the sales success of the new Charlie Hebdo edition is front-page news for many papers, which pay homage to the satirical magazine. Many of their websites include pictures of Charlie Hebdo's cover.

The front page of the left-wing daily Liberation is covered with small copies of the front-page cartoon of Mohammed, with the superimposed headline "Je suis en kiosque" ("I am on sale at the newsagent's").

Le Point magazine looks back at the history of Charlie Hebdo, with numerous cartoons from "over 55 years of impertinent illustration".

But liberal Le Monde strikes a more questioning note, referring on its website to the arrest of controversial comedian Dieudonne M'bala M'bala for allegedly voicing support for terrorism.

"'Charlie', Dieudonne - what are the limits of freedom of expression?" it asks in a headline.

In China, state-controlled media voice alarm at Charlie Hebdo's decision to feature a cartoon of Muhammad on its front page, saying it unnecessarily provokes Muslims.

An editorial in the tabloid Global Times describes the cartoon as "inappropriate".

"If Charlie Hebdo remains defiant on issues regarding Islam, it will probably put the French government in a difficult position," it adds.

A counter-terrorism analyst interviewed by the paper strongly criticises the West's approach to other cultures in general, saying its "pride and arrogance do not conform to the objective reality that we live in a multicultural society".

In Russia, a commentary in business daily Vedomosti links the debate about Charlie Hebdo and free speech with the West's conflict with Russia.

It says the attack on Charlie Hebdo has united western European public opinion in defiance and has proven that the Kremlin's hopes of turning Europeans away from "open society values" and towards its emphasis on "traditional values" are futile.

"Russia has found itself in isolation in the company of marginal politicians and terrorists offended by cartoons," it says. (BBC)
Posted by sabahkini.net at 13:21