BE WARY OF "POLITICAL CHAMELEON" 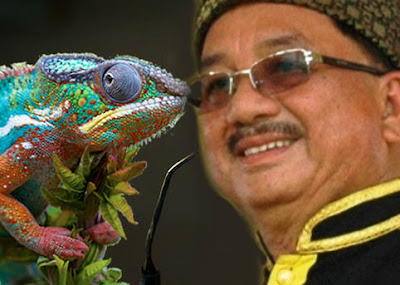 He said when they were holding positions in the Barisan Nasional (BN) government, they supported the state and national development agenda and praised the government's concern for the problems faced by the people, but their tone changed when they joined the opposition camp.

"Now, we observe that they attack the development agenda which they had previously supported, and made numerous sweet promises merely to win the people's support.

"Actually, some of these opposition leaders had held positions as assistant ministers, ministers and deputy chief minister in the state cabinet line-up for years before defecting to the opposition pact.

"Can the people trust these 'political chameleons'?" he told reporters after attending a programme with the Malaysian People's Volunteer Force (RELA), here today.

In this context, Salleh hoped the people of Sabah would not easily be influenced by the sweet promises made by the opposition, but should instead evaluate the quality of leadership of the politicians who supported the opposition pact when they were in power previously and not "when they no longer hold any position in the government".

Brushing aside the allegations by the opposition that the BN government did not bring any development for the people of Sabah, Salleh said the opposition pact leaders had run out of issues and were now only making sweet promises and lies to win the people's support for the 13th general election.

"I believe the people are wise in assessing the development brought by the BN government and would not be easily influenced by the dirty tactics of the opposition," he said.

Salleh, who is also the State Legislative Assembly Speaker, expressed confidence that the BN was now in a strong position to achieve a major victory in the looming general election.

On RELA, he said RELA members should become the 'eyes and ears' of the government especially in the aspect of security including on the issue of the presence of illegal immigrants. (BERNAMA)
Posted by sabahkini.net at 16:25