SAPP IS NOT PART OF PAKATAN 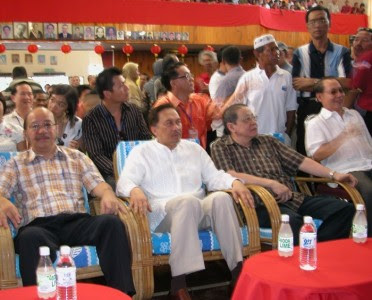 DAP Sabah has been under attacks by SAPP after DAP has announced that DAP would be contesting in Sandakan Parliament and 3 Adun seats ie Elopura, Tjg Papat & Karamunting. Sapp even labelled DAP as secretly assisting UMNO to win in coming election.

DAP has worked for a free n democratic Malaysian Malaysia as long as DAP has existed led by credible leaders such as YB Lim Kit Siang and Karpal Singh.

DAP has withheld worst difficult times when BN was much stronger, fighting BN head on head (while SAPP is colluding with BN). Even then, DAP did not joined BN when invited to join the coalition. That was one time in Malaysia history whereby there was only left with ONE national opposition representation in Parliament, it's DAP!

We strongly reject such intentional irresponsible baseless accusations against DAP. SAPP wanted Malaysians to be misled and thus votes could be split in coming PRU13. These attempts were made with most evil intentions!

We emphasize that DAP has worked 46years for this dream to set Malaysia free, so there is NO chance that DAP will ever join BN coalition nor will DAP even think of helping corrupted UMNO.

SAPP, a party which has slept with UMNO BN for 14 years long, has also made public statements that they would not RE-JOIN BN. If that's true, what makes SAPP (thinking that Malaysians are fools) think that DAP, a party which has NEVER joined BN, will join BN now when BN is already sinking to the core?

Who would Malaysians choose to believe in? A party with principle for 46years or a party with BN track records?

Secondly, to contest in Sandakan seats has always been made known within Pakatan component parties. SAPP is NOT part of Pakatan.

SAPP has clarified that they will work with DS Anwar for possible seat negotiation, which means they will negotiate with Seats agreed upon for PKR only, not PAS, certainly NOT DAP.

If SAPP thinks Yong Teck Lee can deal with Pakatan the way how SAPP used to deal with BN, then YTL is so WRONG!

Pakatan is NOT BN!

BN decisions would be made by DR M or Pak Lah or Najib, so SAPP jus have to deal with the PM.

However, In the spirit of Pakatan Rakyat, consensus among 3 parties top leadership will make the decision, not one single leader.

SAPP YTL thinks he can by-pass DAP or PAS by going straight to Anwar to negotiate for DAP seats? How naive is he?

By keep slandering DAP relentlessly and throwing baseless accusations against DAP has worsened the good faith.

Not negotiating with DAP on seat allocations can only get SAPP seats which are agreed for PKR. (That is if PKR is willing to let go)

Most funny thing is SAPP likes to play the Mr Know Everything role. It's publicity chief Chong Pit Fah has claimed that PKR would stand in Sandakan. SAPP is not part of Pakatan, neither has SAPP ever sat in any of Pakatan seat negotiation meeting. How would He know n make announcement for PKR-Pakatan? He is calling prices for a car that doesn't belong to him.

Thirdly, SAPP intentions are obvious and evil. One hand SAPP is slandering Pakatan citing Pakatan is a Malaya party, on d other hand keep fishing for opposition votes by claiming they are working with Pakatan. SAPP can be described as a poisonous 2-headed snake!

This has caused much confusion as in where SAPP actually stands. Even STAR and PKR has openly asked SAPP to make a clear stand whether SAPP is joining PR or not!

Observing the movements of SAPP throughout the years has helped us come to one conclusion.

SAPP uncertain position as a "spoiler" is so apparent.

We hope if SAPP is really sincere in working together for the sake of People of Sabah and Malaysia, SAPP must join Pakatan Rakyat now! Thus we can immediately sit down on seat negotiation seriously once and for all. DAP door is always open waiting for SAPP to come knocking.

Fourthly, Why SAPP has to hantam DAP for wanting to contest in 4 sandakan seats?  Hasn't SAPP already shown their arrogance for continuous call to contest in 40 seats?

Is SAPP really sincere in working with Pakatan to topple BN?

DAP re-stress our stand to work for 1-to-1 fight against BN:

It must work on the basis of these 3 principles.

1) NO party must be larger than other component parties to ensure check and balance because power corrupts politicians! This is also against the spirit of social democracy!

2) show sincerity to Malaysians by joining Pakatan Rakyat Sabah secretariat. What's the point of ONLY talking about working with PR? This will ONLY be perceived as attempts to confuse voters especially Pakatan voters!

3) respect Pakatan Component parties as National coalition. Stop slandering PR and misleading voters accusing PR a Malayan coalition! What's the difference between SAPP and BN when they are both attacking PR?

DAP has made our stand clear from the very beginning that we want to achieve 1-to-1 fight based on these principles. This stand will not be moved.

We would also like to remind SAPP that PKR has never promised to let go of all PKR seats, PKR only agrees to give some seats to SAPP. Likewise for DAP.

DAP will embrace SAPP with open arms and negotiate when SAPP joins PR on agreement to those principles stated above.
For now, We think the chance is slim as SAPP focus on geographical and demographical politics rather than working for the good of All Malaysians.

SAPP even attempted to cause split among Pakatan Components by issuing false statements on behalf.

For DAP, we think Damages have been done, it's time to do repairs and rectify the situation before its too late. Hope SAPP can come to sense that what SAPP has been doing wont help get them anywhere nor is SAPP doing Malaysian voters any favour ahead of this crucial GE13. in fXt, Indirectly SAPP is helping BN as their actions would cause split votes !

We hope in next 100days, SAPP can make the right decision to join PR or 3-cornered fights is inevitable! DAP has fought 46 years now and there is no reason to give up for the sake of better future for all Malaysians.

3-cornered fight would be most regrettable but we believe Voters in Sabah have awakened and are no longer gullible.

Voters know the purpose of next GE13 is to set Malaysia free from corruption, install justice & democracy and fight for a united Malaysian Malaysia which no longer emphasize on racial, religion, geographical or demographical differences.

Next election is about establishing 2-party system in Malaysia.

Lastly, we will say it again that DAP - Pakatan door is always open and we welcome SAPP to join our fold.

In this critical moment of making history for Malaysia, we are Sabahans but we are also Malaysians. Time has come for all Malaysians to unite and stand together to save Sabah save Malaysia!