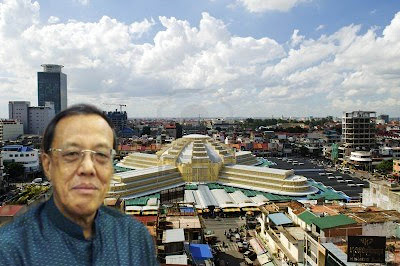 The Ambassador first held the tournament last year to promote closer relations with the diplomatic community and local government officials and corporate personalities in Phnom Penh.

As a prominent member of ASEAN Malaysia's relationship with Cambodia entered a new phase when the Kingdom was admitted to ASEAN in 1997. According to Ambassador Datuk Pengiran Hussein, even before that, Malaysian investors were among the earliest to invest in Cambodia. In 1994 Prime Minister of Malaysia Dato' Seri (now Tun) Dr. Mahathir Mohamad visited the kingdom accompanied by a large entourage of investors and other business personalities.

Datin Patmawati AM Hussein, wife of current Ambassador of Malaysia to Cambodia plays her support role as President of the Women's International Group of Cambodia (WIG) made up of wives of ambassadors in Phnom Penh. WIG is involved in promoting socio-economic activities, which often take them to the poorer parts of Phnom Penh and villages to carry out its social programme.

Datin Patmawati AM Hussein, wife of current Ambassador of Malaysia to Cambodia plays her support role as President of the Women's International Group of Cambodia (WIG) made up of wives of ambassadors in Phnom Penh. WIG is involved in promoting socio-economic activities, which often take them to the poorer parts of Phnom Penh and villages to carry out its social programme.

Following that visit, Malaysian investors began to pour resources into the country. Maybank and Cambodia Public Bank (or Campu Bank), a wholly-owned subsidiary of Public Bank Group of Malaysia, were the first to set up branches in the kingdom.

All told, Malaysian investors were the biggest foreign investors at that time with an investment capital of US$3 billion in Cambodia, covering sectors such as banking, hotels, manufacturing, infrastructure, power and telecom, services and agriculture.

Taking a calculated risk, with support from their governments, other ASEAN investors likewise began to invest in Cambodia in 1996, even when the country was still in the grips of political turmoil.

Cambodia's opening up to the outside world soon brought torrents of investments from many other countries, which resulted in Malaysia falling to 4th place after China, South Korea and Vietnam.

However, Malaysian investors had a head start, and already gained a strategic foothold in some of the most lucrative sectors. Malaysian banks such as Maybank, CIMB, Cambodia Public Bank (or Campu Bank), RHB/OSK Bank, Hwang DBS Bank now dominate much of Cambodia's finance industry through many branches in the kingdom. Many Malaysian lawyers, accountants and other professional people also play an active role in the country's tertiary sector.

The country's textile/garment industry also attracted large investments. Garment export is one of Cambodia's main sources of employment and income, earning USD 4 billion annually according to one estimate, with 6 or 7 of the factories owned by Malaysian companies.

Malaysian investors are also active in Cambodia's infrastructure development such as the construction of 3 airports and a coal-fired 100-megawatt (MW) power plant at Sihanoukville.

Rice cultivation is a traditional means of livelihood for many Cambodian farmers but the country's rice export volume has been insignificant so far.  Lately there is renewed resolve to export more, and the projected volume is 1 million tonnes of milled rice by 2015. This may be somewhat over ambitious considering that by the end of October this year only 150,000 tonnes were exported, 100,000 tonnes short of the 250,00-tonne target.

Cambodia after the Khemer Rouge Holocaust.

Overall, Ambassador Datuk Pengiran Hussein is upbeat about Cambodia's development, as law and order has returned after the tumultuous Khemer Rouge interlude and the power struggle that followed.

There is now political stability. Datuk Pengiran said the country is safe to visit. About 100,000 Malaysians visit various parts of the kingdom annually, mostly Phnom Penh (PP) the capital. About 50,000 Cambodians visit Malaysia. MAS operates 2 flights to PP daily.  According to the Ambassador, some 30,000 Cambodians, mostly domestic helpers, work in Malaysia.

Phnom Penh offers many attractions. Although seemingly chaotic, it is a vibrant city caught in a frenzy of development. There are a number of tourist attractions, which include the Central Market, the Russian Market and an evening boat cruise at the wide expanse of the Mekong river mouth.

Of course the "must visit" attractions are the "Killing Fields" and the notorious Tuol Sleng prison, a legacy of the Khemer Rouge regime led by a deranged man called Pol Pot. The Khmer Rouge Holocaust left three million dead and a scar that will probably last forever in the collective memory of the Cambodian people.

Two and a half years into his appointment as Malaysia's Ambassador to Cambodia (which will finish when the three-year term ends in April 2013), Datuk Pengiran Hj. Hussein and his wife Datin Patmawati and the embassy staff have found themselves part of the local scene, a far cry from the early days when the then Federation of Malaya first established diplomatic relations with the Kingdom of Cambodia in August 1957.

For some time the young federation maintained its diplomatic presence in the kingdom at the level of Chargé d´Affaires, with its Ambassador in Beijing accredited to Cambodia. The Embassy was closed when the Khmer Rouge took power in 1975, and was re-opened in November 1991 following the Paris Peace Accord signed on 23 October 1991, which created the United Nations Transitional Authority in Cambodia (UNTAC) to see to the compliance of the Agreements on the Comprehensive Political Settlement of the Cambodia Conflict.

Today Malaysia and Cambodia cooperate at two levels, private sector and government-to-government. At the latter level Malaysia has a technical cooperation programme with Cambodia under which Cambodian civil servants undergo training either in Kuala Lumpur or in Cambodia as part of Malaysia’s aid programme to Cambodia.

A variety of training courses comprising financial management, Information Technology and administrative short courses are provided by Malaysia. According to the ambassador some 1000 officers and staff of the Cambodian government at various levels have undergone training courses through this technical cooperation programme.

Perhaps it should be borne in mind that most of Cambodia's professional people, civil servants, teachers and anybody with smooth hands were wiped out during the Khemer Rouge reign of terror.

The 1Malaysia Golf at the Royal Cambodia Golf and Country Club was a great success and thoroughly enjoyed by all, including the Sabah golfers who together with their wives were later invited to a sumptuous dinner at the ambassador's residence.
To Datuk Pengiran Hussein and Datin Patmawati, many thanks indeed from the visitors. (Insight Sabah)