GOODWILL AND CAMARADERIE AT OPEN HOUSE 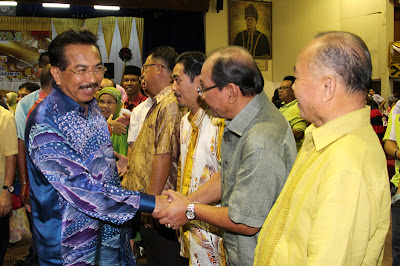 “People from all walks of life come together to celebrate in the open house tradition which shows Malaysia is a harmonious country that enjoys unity,” Tan Sri Joseph Pairin Kitingan told reporters.

With the spirit of Christmas, Pairin hopes that Malaysia will continue to progress with the strength of esprit the corps to strive for a better future under the Prime Minister, Datuk Seri Najib Tun Razak’s administration.

In his Christmas message Chief Minister Musa Aman said Christmas is an occasion for friends and relatives to visit one another to exchange greetings and strengthen ties. 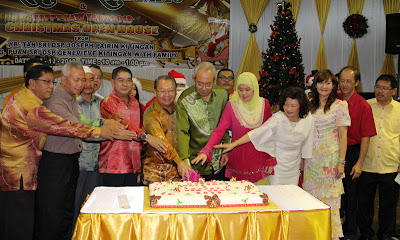 “Despite being diverse in terms of faith and culture, we bridge our differences through common values and our love for peace and harmony,” he said.

According to Musa, Sabah is  blessed with over 32 ethnic groups who have successfully fostered trust, mutual respect and sincerity, and have prospered in peace and unity. “We have found strength in diversity, and learn from one another in gearing Sabah towards greater success,” he said.

Musa also called on the people to reflect on the peace and harmony enjoyed by the country which he said was due to the efforts of past leaders who made sure that our children and grandchildren would have a bright future despite the odds stacked against them.

“I strongly believe that what we have today is the future that they had envisaged for us.

Musa also reminded the people not to allow themselves to be the victims of negative sentiments that could destroy the country’s peace and stability.

He said the nation could lose out on opportunities that could spur success if there was no sense of unity that had been put in place by Malaysia’s forefathers.

“Investors are always attracted by nations that are not only politically stable, but which also have good race relations,” he said.

At the open house, guests were treated to a variety of local food. There was also singing of traditional Christmas songs, and Santa distributing Christmas presents to the children.

Balachandran A/L Ramachandran, 51, drove all the way from Tawau with his family just to celebrate Christmas at the PBS’ open house.

“Christmas is a celebration for all, not only for the Christians. It is a  chance for people of other religions to understand the celebration; nothing should be a barrier to unity,” he said.

Rutinah Anggis, 50, of Sepanggar who had just converted to Islam said despite differences in religion her relationships in the family remain good.

“I don’t have a problem communicating with my family despite our different religions. I feel  so grateful and blessed to be a Malaysian and enjoy diversity as a way of life,” she said. (Insight Sabah)