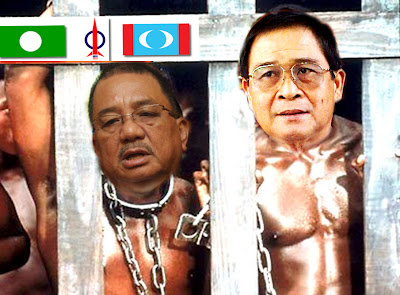 APOLOGISTS and sycophants for Tuaran MP Wilfred Mojilip Bumburing have been flooding the local media in recent days with distractions and disruptions to get cheap publicity for their so-called Angkatan Perubahan Sabah (APS) or whatever at our expense and to take potshots at us.

To add insult to injury, Beaufort MP Lajim Ukin and his Pertubuhan Pakatan Perubahan Sabah (PPPS) have jumped on the bandwagon as well to mislead the Orang Asal in particular Murut and Dusun including the Kadazan or urban Dusun and Sabahans in general.

As Orang Asal, both Lajim and Bumburing are utterly shameless creatures making a spectacle of themselves for the proverbial 30 pieces of silver. Lajim, as a Muslim, is the local proxy of Anwar Ibrahim and his Parti Keadilan Rakyat (PKR). Bumburing, as a non-Muslim, is willing to be a stooge to Lajim and his PPS who are local proxies to the Orang Malaya.

The fact that both Lajim and Bumburing are not together in one organisation shows that one is a proxy and the other is his stooge. Lajim, as the proxy, is Bumburing's master. Bumburing, as Lajim's stooge, is his slave.

Both are traitors willing to betray our people to the Orang Malaya for their nefarious self-serving purposes. This desperate duo, political slaves of the Orang Malaya, can't see beyond their noses in politics. They are only interested in keeping their pockets full and their stomachs full with what is haram. This is their Hidden Agenda fuelled by rotten politics.

Their aberrations merely provide cheap entertainment and will not distract the people of Sabah and Sarawak, Nations in Malaysia, from getting their politics and relationships right irrespective of the politicians and political parties. As Nations in Malaysia, Sabah and Sarawak chose independence as their form of self-determination on 31 Aug, 1963 and 22 July, 1963 respectively.

The Malaya dictated and dominated system of political parties and the political party system in Borneo, based on proxies and stooges, have failed the people of Sabah and Sarawak since 1963.

This is the underlying premise of the United Borneo Front (UBF), an ad hoc apolitical human rights NGO working across the political divide to bring the people of Sabah and Sarawak together on a war footing for a common purpose: to regain our rightful place in the sun.

Malaya is only interested in further stealing our seats in Parliament, already less than the minimum one-third plus one promised by Malaysia, to add to its political strength while weakening us at the same time in a double blow to keep us perpetually down, our status and the future of our children, grandchildren and generations unborn reduced to perpetual slavery by Putrajaya's internal colonisation policies fuelled by racism, prejudice and opportunism.

For example, Putrajaya is driving a wedge between the non-Muslim and Muslim Orang Asal when it comes to appointing Sabahans to head Federal Government Departments.

The Agenda Borneo, an agenda of the people for all time beyond politics, politicians and political parties, stands against everything that the parti parti Malaya in Borneo and their proxies and stooges stand for.

The Agenda Borneo stands pledged to sweep proxies and stooges into the dustbin of history and chase the parti parti Malaya out of Borneo. They have no business whatsoever being here. Their presence is a violation of the 1963 Malaysia Agreement, one of the many constitutional documents making up the unwritten Constitution of Malaysia.

The UBF, in furtherance of this sacred goal in our tanah tumpah dara (land where we are willing to shed our blood), is pledged to ensure that neither the ruling Barisan Nasional (BN) or the Pakatan Rakyat (PR), the Opposition Alliance, gets the magical 112 seats in Parliament to form the Federal Government with a simple majority.

The noble objective of UBF, hence, is to bring the Orang Asal in particular back into the mainstream as a political force to be reckoned with in Malaysia.

Putrajaya continues to marginalize and disenfranchise the Orang Asal in particular by loading the electoral rolls with illegal immigrants handed MyKads by the backdoor and the details either recorded or not recorded at all in the Jabatan Pendaftaran Negara’s (JPN) separate and secret data bank in Putrajaya.

This is an open secret. The evidence is all around us.

The Orang Asal will be further strengthened by the UBF working with like-minded allies through the United Borneo Alliance (UBA) and with other elements of an emerging 3rd Force in the Malaysian Parliament.

The protem United Sabah National Organisation (Usno), representing the Suluk and Bajau who are Bumiputera Malaysians and led by Badaruddin, the son of the late legendary Suluk leader Mustapha Harun, is a key member of UBA.

UBF activists will pursue the political goal of denying both BN and PR 112 seats in Parliament. We will achieve this through and under the symbol and flag of the State Reform Party (Star), the Borneo-based national coalition of the 3rd Force to rival the Peninsular Malaysia-based BN and PR.

Star, in crossing the bridge when the time comes, will support either BN or PR in Parliament to form the Federal Government. However, Star will not be in the Federal Cabinet although it may accept other positions in Government.

Star will only be in the Federal Cabinet when it can initiate, form and lead the Federal Government.

Star, in conjunction with UBA and other 3rd Force allies like Hindraf Makkal Sakthi, will at the most need only 50 seats in Parliament to head the Federal Government in a coalition of like-minded allies. Star, as a minimum condition, will hold the Prime Minister's post in such a Government.

Star is also prepared to help politically unite the minorities, the 45 per cent divided by geography, ethnicity, language, religion and culture, to form a United Front with a moderate faction of the 55 per cent majority bound by Malay as the lingua franca ; uniting the Bugis, Javanese, Minang, Acehnese, Indian Muslims etc in Peninsular Malaysia and Islam as the religion.

Moderate Muslims, we believe, are those who will accept our Batu Sumpah and will not speak of hudud, syariah, Islamisation, ketuanan Melayu and a Muslim Prime Minister.

We call upon incumbent legislators who are dropped by their respective political parties to join Star in its campaign for a better Malaysia.

We urge those new faces who had been expecting to be fielded by their respective political parties, and were denied and cheated again, to sign up with Star for a better Sabah and Sarawak.

We will not be a party like Bumburing and Lajim to dividing the Orang Asal further.

Instead, we will help strengthen the Orang Asal further by taking away the Orang Asal seats which are at present held by the worse than useless Sabah Umno, Sabah Progressive Party (Sapp), the United PasokMomogun KadazanDusunMurut Organisation (Upko) and the Parti Bersatu Rakyat Sabah (PBRS).

We should not tolerate anyone making threats of another May 13. If there’s another May 13 in Peninsular Malaysia, it will be the elements of the majority community turning on each other. Umno/illegal immigrants/police/army versus PKR/PAS/DAP in a bloodbath the likes of which the nation will never witness again.