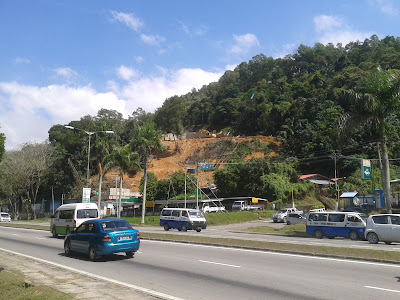 THE LIKAS hill cutting and earthworks carried out along the Tuaran Road opposite the Likas Giant Supermarket had caused worries and fear amount among the people. They have called upon the Kota Kinabalu Member of Parliament Hiew King Cheu to look into the matter whether the said earthwork on the steep hill cutting is done with approval from the authorities and especially the DBKK concerned.

MP Hiew had inspected the site and contacted the earthwork site which is meant for the construction of a high rise condo just between the main road and the steep hill side. The contractors are cutting down the hill slope and putting up reinforced concrete retaining wall to protect the cut earth face. He said the worries of the people is understandable because the height and the steepness of the hill looks really scary and the people feels that this should not be carried out at all.

Hiew immediately contacted the DBKK to find out more details of the project and he was told that the approval of the project was granted. There is EIA report made and approval was given. The other departments including engineering plan, town planning, and structural plan were all in order. There is strict monitoring on the construction of the hill side retaining wall. The authorities will ensure that all works are done to the strict specification without hitch.

The KK MP Hiew felt that with the approval granted is not enough but the authorities should consider putting in extra effort in supervising the whole process in the construction work till the end, There is always high risk factor involved in hill cutting and especially high and steep hill side. The building when once completed is a huge complex, and it is sitting on a narrow strip of land next to a busy main road. Therefore, the authorities have to see to it that the whole thing is done properly and professionally.

MP Hiew also reminds the DBKK, JKR and the DOE to take extra precaution during the period of construction to ensure there is no pollution caused to the environment in the area, especially the road must be kept clean and no traffic congestion. The public safety is of vital importance.